PM basks in glory ...But is she tough enough? 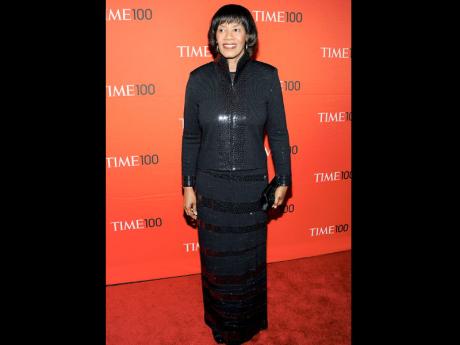 Prime Minister Portia Simpson Miller walks the red carpet at last Tuesday night's Time 100 gala at the Frederick P. Rose Hall in New York, where she was celebrated as one of the 100 most influential people in the world.- AP


Prime Minister Portia Simpson Miller made us all very proud when TIME Magazine announced that she was nominated, along with Usain Bolt, among the world's 100 most influential persons.

Shortly thereafter, it came to light that, among other things, Mrs Simpson Miller was lauded for the courageous stand she took on gay freedom and rights. Were Mrs Simpson Miller an American, I doubt if this would be of any significance; however, it looms large in a homophobic society such as ours.

This was in stark contrast to former Prime Minister Bruce Golding, who said he would not allow any homosexuals in his Cabinet. His successor, Andrew Holness, displayed lack of leadership when he suggested that his stance would depend on the mood of the country.

During the leadership debate prior to the December 2011 general elections, Mrs Simpson Miller indicated, in no uncertain terms, that qualification for her Cabinet membership was simply the ability to perform, regardless of sexual orientation. While not committing to any definitive action on the matter, Mrs Simpson Miller indicated that, if elected, she would review the buggery law.

In one 90-minute debate, Portia Lucretia Simpson Miller did what no other Jamaican prime minister attempted by tackling head-on what was previously considered taboo. This in a country where violence against persons of a different sexual orientation, while not the norm, is silently cheered on by many.

Mrs Simpson Miller's utterance at the leadership debate was clear for all to hear and see, as the programme was broadcast internationally. It was against this background that I was surprised at the seemingly sensational call last week by Betty Ann Blaine, convenor of the New Nation Coalition. Mrs Blaine demanded that the prime minister tell the nation what she promised the international gay community. It seems to me that either the goodly convenor was not around for the leadership debate or she was mischievously throwing out bait.

We all know that promises are comforts to fools; however, taking a stand as Mrs Simpson Miller did in a strongly homophobic society on the eve of a national election is nothing short of courageous, as confirmed by both the resounding election victory and by TIME Magazine's award. If, in fact, Mrs Blaine meant to throw out bait, no one bit, as there has been little, if any, discussion on her concern since.

Mrs Simpson Miller accepted her award in a special ceremony last week attended by three other Cabinet ministers. The minister of information went in advance to finalise arrangements for the ceremony, while the ministers of mining and energy, and tourism and entertainment, were on official business in the United States regarding their respective portfolios.

The honour accorded our prime minister is a once-in-a-lifetime, and as such I have no challenge if three or more Cabinet ministers had attended specifically for the function. In the spirit of inclusiveness, the opposition leader, or his designate, ought to have been invited by the Government.

The fact is that our prime minister, and by extension, the people of Jamaica, ought to be allowed to bask in her glory even for one memorable evening. The investment in this event can easily provide a substantial return to the country in investments and tourism if properly planned, promoted and followed up.

I, therefore, disagree with the leader of the Opposition's charge of extravagance. While it is important to be frugal at times and save every penny we can, we must be careful that we do not lose sight of the bigger picture. Yes, Jamaica is in a very precarious economic position; and yes, the Budget has been delayed. However, we now need strong leadership on both sides of the floor in Parliament, as well as outside Parliament, to lead us through the difficult times.

The Leader of the Opposition must cast his thoughts to strategic issues to deal with our various crises.

When Mrs Simpson Miller took the reins of leadership in 2006, many, including me, thought she would have made greater use of her strong sense of social awareness, as well as tough decision-making. Instead, she wanted to wait on her own mandate and in the process lost the 2007 election.

I believe Mrs Simpson Miller has learnt her lesson well and will not make the same mistake. As the conditions and issues in 2012 are far more grave than those in 2006, her natural gifts will be that much more needed in pursuance of Vision 2030.

The major issue facing the Government today is the huge public-sector wage bill and the political will to cut the sector. This is nothing new, and since Edward Seaga made cuts in the mid-1980s, no prime minister has had the testicular fortitude to repeat what he did.

We must remember that following the public-sector cuts in the 1980s, we had GDP growth in the stratosphere compared to the last 20 years. In fact, since 1990 we have not seen four per cent growth.

The first sign of tough decisions by the new administration was recently demonstrated in Parliament by Transport and Works Minister Dr Omar Davies. He, like Finance Minister Peter Phillips and Opposition Spokesman on Finance Audley Shaw, has been frustrated by the lengthy project-approval delays caused by the Office of the Contractor General.

Dr Davies declared "the administration will not allow the Office of the Contractor General (OCG) to be a stumbling block in the engagement of private entities as the State moves to take advantage of investment opportunities". He announced that an independent oversight panel has been established to expand the framework for monitoring the award of contracts.

In response to the opposition leader's concerns that the legality may be tested by the contractor general, Dr Davies said, "Impotence is not an option." Dr Davies' tough decision has been made easier by the support given him by Opposition Spokesman on Transport and Works Karl Samuda.

I, too, give support to Dr Davies on this matter. In fact, in an article titled 'Contractor general needs to balance process with value', published in The Sunday Gleaner of April 15, 2012, I suggested that the OCG review the underlying factors causing these long delays.

Mrs Simpson Miller demon-strated strong leadership in the debate, which propelled her to election victory on the local stage and to be named among the top 100 most influential persons on the international stage.

While we must bask in her glory, these achievements have not, in and of themselves, impacted the stark realities of Jamaica in 2012. We now expect Mrs Simpson Miller to use strong leadership to tackle head-on the serious issues which, like Admiral Bailey may be saying: "You think say we done; we just a come!"

Robert Wynter is the managing director of Strategic Alignment Limited, which facilitates organisational realignment and leadership development. Email feedback to columns@gleanerjm.com and rob.wyn@hotmail.com.