Options for reform of the public-sector pension system 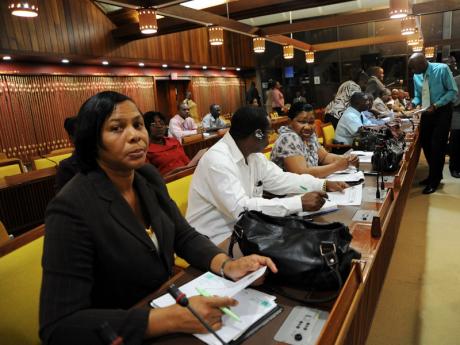 Polilce Officer at the Special Constabulary Forces Association forum on Pensions and Pension reform at the Jamaica Conference centre in November last year.

The Council believes that the following principles should inform the proposed changes to the current system of public pensions:

2.     A commitment to funding within a trust fund so that over some 20-30 years there would be increasing security of benefits. The pace of funding depends on the priority placed on security, using these funds as a driver in the economy and affordability.

3.     The exclusion of these first two principles in any proposed pension reform, which reduces benefits and has no safeguards over the medium term, means that members will be in a similar position to the one they're in today - characterised by a gross inequity between generations.

4.     Provision of an adequate pension to ensure that pensioners are able to meet basic social-welfare needs and avoid old-age poverty. According to World Bank studies, an adequate replacement ratio requires that pension should replace 40 per cent to 60 per cent of gross income. However, where the worker's pre-retirement income is low, then to avoid old-age poverty, this worker needs closer to a 100 per cent replacement ratio. Consequently, the pension should adequately cover an acceptable amount of pre-retirement income as well as provide cover against the adverse effects of inflation and longevity.

5.     To limit distortions to the labour
market, benefits and contributions should be consistent with practices in the private sector and should be set in the context of the entire compensation package.

6.     Fiscal sustainability. The Gleaner Council examined the four proposals that have been publicly aired versus the current (base) system of pensions.

These proposals were developed by the Ministry of Finance (Green Paper No. 2-2011) together with their World Bank advisors, Mrs C. Hall (actuary), the Caribbean Actuarial Association and the Private Sector Organisation of Jamaica.

Some of these terms are not a part of our everyday language and so we explain them here.

The amount (typically expressed as a percentage of the salary base that is pensionable) that has been decreed to be paid into the pension fund by the member and employer. This may be a fixed percentage throughout a member's career or a rate increasing with age. When members contribute they share the cost of pension provision with the employer.

These are defined benefit (DB) and defined contribution (DC) arrangements, separately or as a mixture depending on the benefit design implemented. The DB is an employer-sponsored retirement plan where employee benefits are sorted out based on a formula using factors such as salary history and duration of employment. Investment risk and portfolio management are entirely under the control of the company.

The DC arrangement sets the contribution scale, where prescribed contributions (usually expressed as a percentage of salary) are made into the fund by and on behalf of each employee, whose retirement benefits are determined from the accumulation of those contributions with the yield from the investment in the fund less expenses.

The attraction for DC is that a third party will pay the pensions financed by the members' accumulated accounts at retirement and eventually remove the liability from the government.

The stated per cent per year of service at which the DB pension is earned.

Replacement ratio - simply put, it is the ratio of a worker's pension to his/her pre-retirement income.

This is the value or total liability for all outstanding pension claims the government or the fund will pay.

The increases applied to pensions to take into account inflationary increases in the cost of living.

This is the yield on the investments made with the contributions. Bear in mind that expenses will be met from the fund unless otherwise paid. Also, the public sector is probably the largest set of workers saving for retirement, so retail products like approved retirement schemes are not suitable from an expense angle, hence they will need a customised vehicle for funding.

The salary base on which contributions and benefits are calculated. Total compensation would be the maximum pensionable salary base.

The effective date for changes in current benefit formulae and the method and timing for complete change.

The four proposals share four aims in their approach to reform the public-sector pension system.

They aim to create equity between pensioners and the various generations of workers; adopt reforms that ensure sustainability of pension schemes within the context of tight fiscal constraints for the foreseeable future; provide adequate benefits to beneficiaries who have dedicated their working lives to public service; and, as explicitly articulated by the Private Sector Working Group and the Caribbean Actuarial Association, the security of benefits already earned.

Although the groups appear to have been working from the same base data, each proposal has its unique solution to the problem of affordability.

The council recognises that different assumptions have been used and various levels of importance may have been given to the four aims.

There should be a comprehensive education campaign to get a full understanding of the chosen scheme and hopefully to get buy-in from all stakeholders drawing on experts and influencers from all sectors of society to dispel misconceptions and clearly articulate the true effects on public-sector workers, pensioners, government and taxpayers.

The Government should implement and safeguard a governance system that is consistent with the governance system of the pension plans in the private sector, inclusive of being regulated by the Financial Services Commission. The purpose of this recommendation is to put in place sufficient security and to leverage the economies of scale of the fund. It is aimed at optimising the returns on the fund. This large group of savers deserves a team of experts to negotiate fees and manage potential adverse impacts in advance of a crisis. Furthermore, where possible, the available capacity and competence within the private sector should be tapped to manage and provide oversight of the system.

A report on the funding status on an economic basis and projected cash flows over the next five years should be disclosed in Parliament every year.

The deferred pensions and pensions in payment to current pensioners and contingent dependants' pensions should not be affected by the reform.

Any contributions by the Govern-ment for funding purposes should be invested, as practically as possible, into non-Government of Jamaica (GOJ) debt to increase the pool of real assets.

A defined benefit (DB) plan is likely to have the most acceptance by the public sector to be retained for existing and new employees because it poses lower risks than a defined contribution plan. It more appropriate for the age, service and pay profile of the members, and creates a smooth rather than a shock transition in certainty of benefits.

The attraction for defined contribution (DC) is that a third party will pay the pensions financed by the members' accumulated accounts at retirement and eventually remove the liability from the Government. The drawback of the DC system is the volatility of the size of the pension and therefore unlikely to fulfil the adequacy criterion.

The DB benefit structure can be revised with cost-cutting changes to the pension formula, normal retirement age and early retirement terms. Specifically, the formula should become, for each year of service, before and after the change, two per cent of pay averaged over the last five years.

In addition, the member receives his full salary for an additional five years as an employee in a labour market that has few opportunities for alternative employment.

Surviving spouse's pensions, on death of the retiree, should be equalised across all groups, at 50 per cent of the member's pension. This means that the spouses of teachers would then be eligible to receive pensions on the teachers' death after retirement.

The practice of restoring the commuted pension (pension given up at retirement for a cash payment) after 12.5 years of retirement should cease because it is a unique and costly practice.

The latter is, coincidentally, the current pension payroll. Importantly, on the basis of the Council's calculations, the GOJ would save roughly $4 billion per annum in terms of cash flow.

Existing employees should be encouraged, albeit on a voluntary basis, to contribute to this plan by way of additional voluntary contributions to increase the likelihood of receiving a sufficient income during retirement. The plan should be established on a group basis so that the contributions enjoy reduced expenses arising from the benefits of economies of scale.

Importantly, these funds should ultimately be used to buy annuities upon retirement to supplement the pension benefit payable under the defined benefit scheme or to provide inflation protection in respect of the pension payable by the base plan.

The transition period should be immediate given the gravity of our fiscal position. If this action is taken, the implied pension debt falls from $223 billion to $163 billion, a one-time savings of $60 billion or five per cent of gross domestic product. The amortisation on the reduced debt over 20 to 30 years provides some fiscal space and a sound footing for dealing with this hidden debt.

Notably, the cost of each year's additional accrued benefit falls from $5.5 billion to $1.5 billion, a recurring saving of $4 billion per annum.

We recommend that there be no formal indexation of pensions under the defined benefit plan. Rather, we suggest that any future consideration to increase pensions in payment in order to compensate for the effect of inflation should be based on affordability and sustainability, and should be fully funded in the year of provision.

District constables should be provided with pension benefits similar to those provided to all members of the civil service.