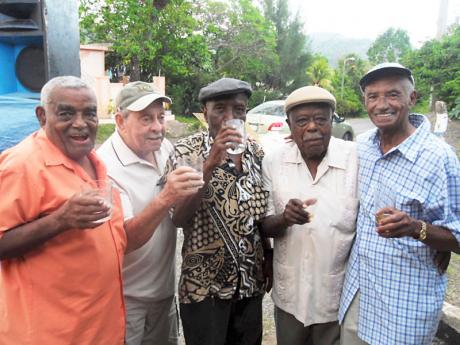 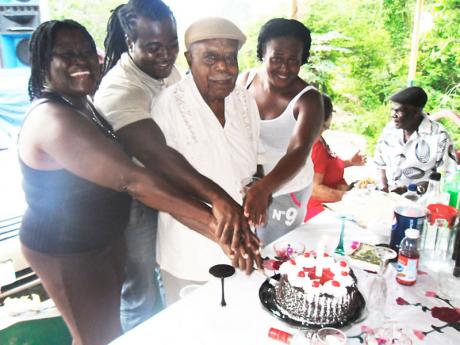 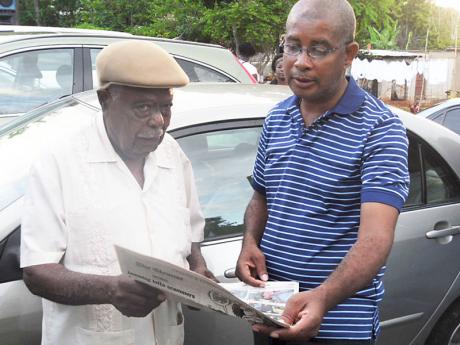 Kenric Douglas (left) shows a photo of himself and his friends, taken at his 90th birthday celebration party and published in the Gleaner last May, to Norman Scott, mayor of Spanish Town. 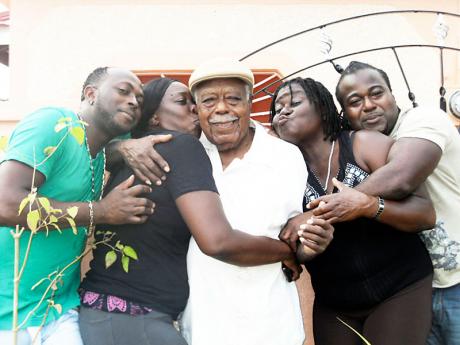 Birthdays are significant, especially when celebrated with friends, families and colleagues dating back more than 60 years. In fact, Kenric Douglas who was in a festive mood considers his recent milestone, 91, a ripe old age. Displaying vim, vigour and vitality, there was hardly a moment when he was not on his feet greeting his guests who converged at Ken-Ann Complex in Cudjoe Hill, St Catherine, on Saturday, April 21, to celebrate the occasion.

To say the bubbly World War II veteran of the Royal Air Force Association (RAFA) was the life of the party would be an understatement.

In an inimitable manner, master of ceremonies Merline Bardowell guided the proceedings of prayer, speeches and toasts. Common to most speechmakers were the expression of the kindness Douglas extended to young and old in his community.

Douglas' spouse Velma, their son Kenric Jr and Velma's daughter, Maxine, joined him in the cutting of his birthday cake to rousing applause of those present.

The guests, family and close friends were treated to scrumptious meals of rice and peas or white rice with curried goat, stewed pork, fried chicken and vegetables. Prior to this, they lavished in mannish water. Then there was the choice of whisky, rum-bar, gin, white rum, Johnnie Walker double black, Smirnoff vodka, coconut water, sodas. To top it off, guests enjoyed servings of Black Forest cake.

Food aside, some ensured that they did not take home any extra pounds, as they danced to aptly selected songs by resident D.J. Desmond Roy. But one that seemingly got everyone hooked was R. Kelly's remix of Step In the Name of Love, particularly verse one: 'I know that it's somebody's birthday tonight somewhere and I know somebody's gonna celebrate tonight somewhere.'

second year in a row

Following the formalities, Bardowell, former executive director, National Commission on Science and Technology and her husband, Keith, chatted with Outlook expressing delight about journeying from St Andrew, a second year in a row, to celebrate with Douglas.

Velma, 61, gleamed as she expressed pleasure in nurturing her soulmate with whom she shares two children, for 30 years committing to continue 'until death do us part'.

Then came the testimony from Douglas, who with a feather in his cap spoke about his spouse, with a gratifying smile, 'She has been taking very, very good care of me, that's why I look so fit and feel fit."