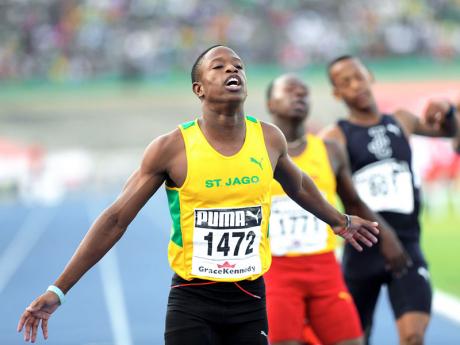 ISSA moves to cut number of events for boys

PHILADELPHIA, Pennsylvania:The governing body for high school sports in Jamaica will cut the workload for male athletes competing at its annual Boys and Girls' Championships, starting with 'Champs' 2013.

The move follows concerns by the Inter-Secondary Schools Sports Association (ISSA) for the safety of the young track-and-field athletes, which, ISSA claims, is being endangered by overzealous and inconsiderate coaches in their quest to rack up points and glory at the popular meet.

"We need to safeguard the development of these boys because we understand that most of the coaches, their thing is to win championships or get as many points as possible," said ISSA's competitions officer George Forbes, who was (in Philadelphia) over the weekend to attend the 118th Penn Relays involving numerous Jamaican high schools.

ISSA's executive committee is scheduled to meet next month to iron out details and approve rules that will prevent schools from entering any male athlete in more than four events total at Champs.

The plan will then be put to a vote of the schools' principals in June. If 75 per cent approve the new rules, they will be implemented at Champs 2013. If enough votes are not secured in June, there will be a one-year wait period before the rules can be implemented.

During the last 'Champs' in late March, boys were allowed to compete in up to five events, while the girls were limited to four. That will be changed as ISSA views it as dangerous to the health of the male athletes.

"When you look at a boy doing five events over a four-day period, we're talking about heats, semis or finals, or preliminaries if it's a long jumper, and semis and finals," said Forbes. "We're talking about in excess of 12 'goes' in four days. It's too much."

He believes the executive and principals will back ISSA's initiative.

"We're going to - and I think it's gonna be accepted by the executive - and then we take it to the general meeting for (the principals) to pass it."

ISSA also dismissed establishing a Class Four for boys at Champs, even though the girls are allowed to compete at that level. Forbes said ISSA has consulted with doctors and determined that Class Four-age boys are not mature enough to compete at Champs.

"We take it on advisement from the medical people," he explained. "They have advised that at that age the boys are not physiologically developed to compete at this championship. And, I think, in their wisdom, would have looked at the history of boys in Class Three who, for the most part, were overworked by the coaches and that, in some way and shape and form, must have influenced their decision."

In addition, first-year Class Three male athletes will be restricted to a single individual event, plus a relay. Forbes said that is necessary because boys who would have been eligible to compete in a Class Four-type category are being pushed to compete in Class Three, and are being overworked. He pointed to one boy who was asked to run a tough schedule at 2012 Champs.

"There's a school now that had a Class Four (age) boy running in Class Three and he was given the onerous task of running the 200/400 double, which is perhaps the hardest double at championships," Forbes explained. " ... He didn't really do well. And I'm sure if he was given one event he would have done better."

The age group for Class Four girls at Champs is under 13. For Class Three boys, it is under 14. Class Three girls are under 15, while Class Two for boys is under 16. Athletes must fit the age requirement at the beginning of the school year in September.

Several senior Jamaican high-school coaches at Penn Relays generally agreed with ISSA's plan to protect athletes. However, the reason behind not introducing a Class Four for boys was met with some debate.

"I don't think there is any scientific explanation apart from the fact that they say females develop or mature quicker," said Maurice Wilson, coach of Holmwood Technical's girls' team.

"At this point in time, I don't think the status quo has to change ... but then, how do you justify the females at 13 and 14? ... Maybe I think I would prefer it to remain the way it is until we can decide, scientifically, whether (the boys) should run or shouldn't run (in Class Four)."