Drawn to polo by his love for horses 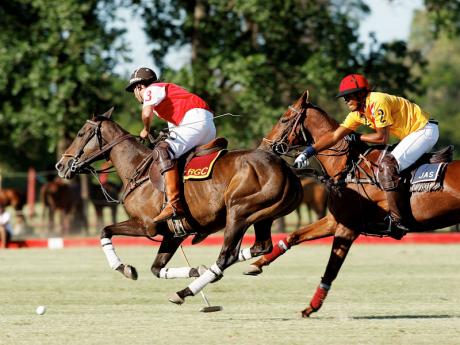 Craig Russell (right) in action on the polo field. Contributed

At 33 years old, Craig Russell is considered a fairly young player in the world of local polo. He was attracted to the sport long ago, primarily due to his love for one of the most vital elements in the playing of the game, horses.

Russell actually started out doing other equestrian events, such as show jumping and dressage, and represented Jamaica in these disciplines. He was also groomed to play tennis by his father, Richard Russell, who is a former Jamaica representative. However, at age 12 he would combine two of the main attributes needed in playing the two sports, skill in riding a horse and power in hitting a ball, and venture into polo.

"I enjoyed being around horses and riding and it (polo) just looked like another competitive game that was another challenge; plus being that I am from a tennis background, hitting a ball is not too far-fetched," Russell explained. "I used to go to shows and after they would have polo matches, so one thing just led to another," he added.

The former Cornwall College student, who started riding at age six, believes this has given him an advantage despite the sport being dominated by persons older than he is.

"When I was younger, I used to enjoy watching horse racing on TV and then when I moved to Montego Bay at around six years old that's when I started riding and I never really looked back since then," Russell shared. "I never looked at it as anybody being older, even though there are a lot of people that are older than I am playing, but they probably can't ride as good as myself, so I wasn't intimidated by the older heads at all," he added.

Russell, who spends plenty of his time teaching youngsters how to play tennis through his academy, which is based at Campion College, is pleased to see the role others are playing in developing polo.

"It is a lot harder to actually start playing polo in your 20s and 30s, not having a riding background, because riding helps you," Russell revealed. "You find now a lot of kids coming up through riding school, especially in Kingston, because they have a very big riding school at Kingston Polo Club," he added.

Another stigma that Russell believes is attached to the sport is that it is for rich persons. He does concede, however, that it is not a cheap discipline to participate in mainly because it is best to own your own horses and they are expensive to maintain.

"It is not a cheap sport by any means, but the polo community is really close, so everybody looks out for everybody," Russell reasoned. "If you are short of a horse, there is always somebody to say here, you can borrow one of mine," he added.

Russell, who has the joint best handicap in the sport locally, three goals, attributes his development in the sport to acts of kindness from other polo players, who have loaned him horses for big tournaments. He currently owns five ponies, but they will not be ready for competition before next year.

His fondest memory in the sport to date is winning the Senior Cup with the St Ann Polo Club in 2010, which is the highest rated club cup in Jamaica. They defended the title in 2011 and are looking forward to make it three straight in the coming weeks.

His Bin 26 team has, however, missed out on defending their Scotia Private Client Group Jamaica Open Polo title, for which they were two-time defending champions. The team lost by six goals to five in overtime to the Audi team in the semi-final. Russell and his other Bin 26 teammates, Lesley Fong Yee, Shane Chin and either Andy Vernon or Kirk Chin will meet Wyndham at the Kingston Polo Club, Caymanas Estates, today at 2 p.m. in the subsidiary final.

The main final will be contested between Audi and Scotia at 3 p.m.