Foster-Hylton: Everything in place for a good season 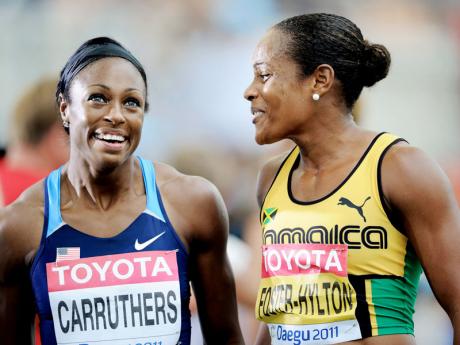 Brigitte Foster-Hylton is working her way to full fitness; not quite there yet with the smooth mechanics that helped her to a 100m hurdles World Championships gold medal in 2009 but with each cleared hurdle, she moves one step closer to realising her own dreams - a first Olympic medal.

The athlete was among the first to report to training at Stadium East when The Sunday Gleaner visited the MVP Track Club last Wednesday, the steel spectator stands and handful of other athletes her only company.

Foster-Hylton, now 37 years old, has been there and done that, she has also had her fair share of disappointments throughout her lengthy career.

A serious hamstring injury to her left leg in 2010; a repeat of a similar injury suffered in 2007 to her right leg left her 2011 IAAF World Championships campaign in shreds with the national record holder failing to make the final with a 12.87 clocking in the semi-final.

Pedestrian by her standards, but it was nonetheless a gutsy effort by the determined athlete considering that she only managed a few weeks of 'proper' training ahead of the championships and was virtually running on one leg.

"12.87 in the second round," Foster-Hylton reminisced. "I draw back on that experience from time to time for confidence. I tell myself that if I can run 12.87 on one leg, I need to just get well and I'll be fine."

"My trail leg is still a little bit low so I am working on keeping that high and I am working on getting out of the blocks but besides that everything else is clicking at the moment," she added.

The 'first lady' of the MVP Camp is once again finding her swagger, back in good health and with her confidence growing with each passing day of injury-free training, Foster-Hylton is back, her recent struggles a necessary reminder of where she is coming from and motivation for where she wants to reach.

"I feel good, I feel great and I just hope and pray that the body stays in good condition this season," Foster-Hylton said, her trademark smile following soon afterwards.

"Things are looking really good again," Foster-Hylton told The Sunday Gleaner. "I try to put the disappointment of last year behind me but from time to time I get a little down because it was really an agonising year, but this year everything is in place for me to have a very good season."

"Getting over the injury this time around was harder than the previous time ... It was way more difficult because the injury was way more severe," she added. "It was mental, I really felt like quitting many days and I really have to thank Mr (Stephen) Francis because he is the one that kept me going and if it wasn't for him I really would have just packed it all up."

It wasn't the first time that the MVP head coach had steered her from retirement, as it was his encouragement that brought her back into the game prior to her success in 2009.

With the Olympic Games a matter of weeks away and the upcoming JAAA/Supreme Venture National Senior Championships coming before that, Foster-Hylton expects to have more say this season in what happens in the 100m hurdles.

Sally Pearson - the world champion and fourth fastest woman in history seems unbeatable, but the Jamaican is not perturbed by the Australian's dominance and is gearing up for what she expects to be an interesting season.

"Just wait and see, it will be an exciting year," Foster-Hylton offered before jogging off.