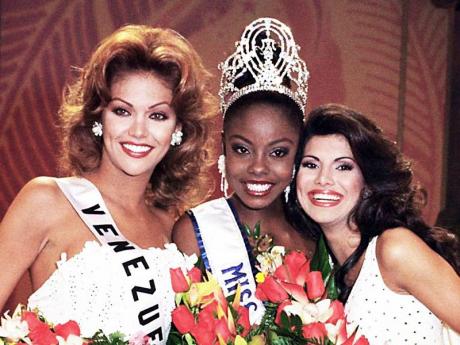 Wendy Fitzwilliam (centre) delegate from Trinidad and Tobago is sandwiched by runners up after being crowned Miss Universe 1998. - Contributed

BEAUTY QUEEN babymama drama is hardly new to Jamaica or to the Caribbean. Unmarried queens have been quietly having their babies for decades, long before the appearance of Facebook. Sometimes, the pregnancies were met with raised eyebrows and other times, nobody seemed to notice. Eventually, the dust settles and all the queens move on to lead happy and productive lives with their prosperous and talented offsprings.

In the '60s and '70s, male politicians generally had the first pick of local beauty queens for wives, and many high-profile Jamaican politicians were beneficiaries of some of Jamaica's most bewitching beauties. The queens back then pretty much adhered to the established social order of marriage first, then children after, until Miss World 1976 Cindy Breakspeare became pregnant for rising reggae superstar Bob Marley. That revelation drove the London tabloids into a feeding frenzy as much as it turned the pretty uptown Kingston mango carts upside down. Tongues wagged. Jaws dropped.

The then-unmarried Cindy had broken all the rules in the very liberal '70s. Former Prime Minister Michael Manley, himself an avid admirer of beauty, had recently reminded the nation that there were no longer 'illegitimate' children as all children born in Jamaica to Jamaicans were equal. Marley's partnership with a Miss World did not hurt his accelerating career in the least, and their son, Damian Marley, would later become a reggae superstar, dominating the tour circuit and topping the Billboard charts.

Years later, our neighbour Trinidad and Tobago stopped in freeze-frame in 2006 when their unmarried Miss Universe 1998 Wendy Fitzwilliam suddenly announced her pregnancy to a devastated nation. Worse, she refrained from immediately naming a father. "Apparently, the news of my pregnancy is carried in every news outlet in the country," Wendy later wrote in a tell-all book, Letters to Ailan, as she described the turbulent relationship she shared with her son's Jamaican father (who had also fathered a child with his former wife and another Miss World, Lisa Hanna).

"Ours is a young relationship, very new. I am somewhat sceptical about love. Cupid has not been terribly kind to me. I have learnt that at first, second and even 12th sight, lust is usually the prevailing emotion. Love comes with patience", Fitzwilliam further stated in her book.

The following year, in 2007, beauty queen babymama drama moved back to Kingston when 22-year-old Miss Jamaica World Sara Lawrence attempted to relinquish her title due to pregnancy.

Right now, Jamaicans are stunned at the announced pregnancy of unmarried Yendi Phillipps, first runner-up in the Miss Universe 2010 pageant. Phillipps is a gifted dancer and former member of the National Dance Theatre Company and she identified reggae artist Chino McGregor, son of reggae icon Freddy McGregor, as the father of her unborn child. Comments on social media suggest Yendi's pregnancy should have been preapproved by majority vote in CARICOM, the Government, the Opposition, trade unions and the Jamaica Council of Churches. She is, of course, a grown woman and she is free to make her own choices.

Some people blame hypocrisy for the wave of negative comments on Phillipps' out-of-wedlock pregnancy. I disagree.

Jamaicans love weddings. I think that deep down in the collective Jamaican psyche, there is a decades-old hunger for a 'royal Jamaican wedding', one with two glittering celebrities, horse and carriage travelling over hill and gully. We've seen Charles and Diana, Prince William and Kate Middleton but Jamaicans crave their own home-grown once-in-a-lifetime endless love. The Beenie Man wedding was cool, but not loud enough for a nation fixated on an ultra-lavish, star-studded wedding.

Just do an outlandish wedding today. Find a sweetheart tomorrow if you want to, but just make the wedding happen. Older people want to see such a wedding unfold before they die, and Phillipps and her ex-beau, track and field star Asafa Powell, were excellent candidates for the fairy tale that would have made a perfect script, one that you'd only otherwise find on the stage of a theatre production. Jamaicans seem to be just a little disenchanted that there won't be a Yendi and Asafa wedding right now.

Older folks and seasoned lovers know that truth can be stranger than fiction and lovers can be stranger than both. Any card can play in the future, including the Asafa card. People are wondering too if Chino, like Bob Marley, will now rise to rapid superstardom, freshly empowered by the charms of a titled queen. But in the meantime, the search continues for that fantasy Jamaican wedding of the century that will make the entire country stop.