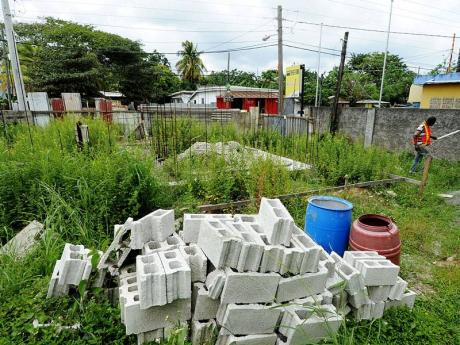 The site of the Golden Grove post office in eastern St Thomas. The construction to date has been funded by the Constituency Development Fund, and is to be continued under the Jamaica Emergency Employment Programme. - Ian Allen/Photographer

MORE THAN $1.5 million has been earmarked to be spent on constructing a post office at Golden Grove in eastern St Thomas.

The post office is being built under the Jamaica Emergency Employment Programme (JEEP), a flagship emergency programme of the Government.

The Gleaner will be watching the JEEP in Golden Grove, as well as other projects, to see whether the deliverables under the programme are being met and if taxpayers are getting value for money.

Of note, money from the Constituency Development Fund has already been spent on the Golden Grove project. The Gleaner was unable to ascertain how much.

The Gleaner has also been unable to get information about the number of jobs that will be created by way of the Golden Grove project.

Unemployment is high in eastern St Thomas, and the promise of a job can't come too soon for many residents.

"There are issues that need to be worked out," Leighton Uter, the National Works Agency parish manager for St Thomas, said when asked when the project will start.

The St Thomas Parish Council had shut down the site late last year after the National Works Agency broke ground and began construction without approval.