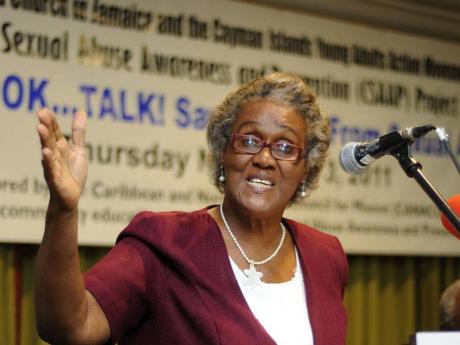 FORMER CHILDREN'S Advocate Mary Clarke said last Thursday that Jamaica has come a far way since Independence as it relates to children's rights,

"These are things we must celebrate and recognise pertaining to children and our achievements since Independence," Clarke said during a seminar, which explored whether Jamaica's social policy has achieved anything since Independence.

The seminar was held at The Jamaica Pegasus hotel, New Kingston, and was organised by the Sir Arthur Lewis Institute of Social and Economic Studies, University of the West Indies.

"There is the shift in attitude from them being the deviant troublesome to the child with rights and, more important, life. We cannot forget our duty as adults, families and the Government ... however, we must ensure that these rights are upheld and the solutions we are finding to these severe problems are put into effect," said Clarke.

She said there may be severe challenges and difficulties such as child abuse that need to be addressed, but we should not allow this to cloud our achievements as a nation. One such accomplishment, she said, is the shift in attitude towards juvenile delinquency.

"The only perspective on child delinquency was from the remedial aspect, they were viewed as deviants and the only method of 'fixing them' was placing them in institutions," said Clarke, Jamaica's first children's advocate who is now retired.

Clarke said subsequent to achieving Independence, a five-year plan was drafted for the period of 1963-1968.

The plan stated that 'deviant behaviour among children has principally been treated institutionally and since there are insufficient means of employing prevention, the emphasis will continue to be institutional care'.

"The tone itself displayed how the children were regarded and what little rights they had," Clarke noted.

She told the audience that the beginning of the human-rights approach in dealing with children was sparked through the 1978 development plan.

Clarke said this plan stated that 'help was a fundamental human right', with the main goal being to develop adequate preventative service that the family needed.

"There was a shift in emphasis over the 15-year period since 1963, evidence of the beginning of a rights approach with plans for prevention and dealing with children were beginning to surface. They were now treating the families as well, as they realised they played an important part in raising the child. This is a major shift as opposed to the first plan, which was centred around punishment for the deviant child," Clarke added.

She said by 1991 the ratification of The Convention of the Rights of the Child law was a new approach towards children. This was an approach aimed at prevention and improving the quality of life of children. Clarke said the passage of the Child Care and Protection Act (2004) was also significant.

Hermione McKenzie explored the topic of 'Foundations of Jamaica's Social Security System'; Dr Pauline Knight examined 'The impact of Education on the goal of 'Education for All', and Faith Innerarity looked at 'The evolution of the social protection system in Jamaica: from Residualism to the Rights-based Approach.