First violinist in harmony with life 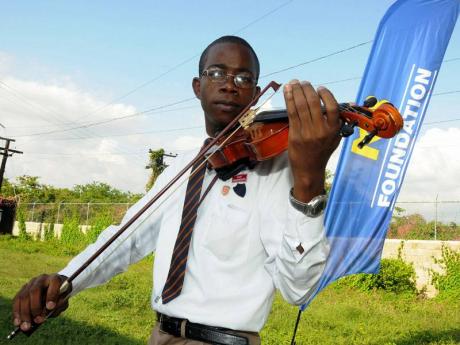 Jerome Palmer says being in the orchestra has benefited him in many ways.

HE CAME to the door peeking in, not with the eyes of someone who doesn't know what's happening; he's been here before.

Jerome Palmer, a member of the National Youth Orchestra of Jamaica (NYOJ) is watching this latest practice at his alma mater St Andrew Technical High School (STATHS). Spotted by NYOJ Chairman Dr Nigel Clarke, he immediately calls Palmer over. "This is one of our successes," he said of the blushing student.

"I'm a first violinist. I'm an assistant leader of the first violin section, so at times I vary from first to second to assist the second violin players," said the fast-talking STATHS student. Palmer has been with the orchestra since inception in 2009 and compliments were not enough to describe the NYOJ.

"It has helped me in numerous ways. The orchestra is a community of different instruments, but at the same time, it is a community of different persons. And so I have to literally, not just interact and try to play in harmony with the music, but to try and live in harmony with the persons playing the music," he said. "It gives a symbolism of what the real world is like. We have to live in harmony with everybody." Despite a number of stringed instruments to choose from, he chose the violin and Palmer even gets mystic when he talks about it.

"It was something that just caught me. The violin has that sound like 'I have all right to brag but I'm just going to stay cool', you know?" he said. He thinks that being in the orchestra has helped him to be a better person.

"When you are among other persons, you find out that everybody has their problems so you have to try to work with those problems in the orchestra and I find that I can better work with persons in general, to literally cooperate with other people."

Learning any instrument takes hours of practice, but as a student you don't always have that time. He tries to get in three or four good hours a day and especially on Sundays. But in the week is more cramped for time.

"I have to find ways to go over the notes, going over the scripts to make up for the time that I'm not practising." And he has a full plate, being president of the debating team, president-elect of the Key Club, 4-H Club member, student councillor and even youth mayor of Kingston and St Andrew. But these many badges don't get to his head.

"It's more about putting forward a character that is able to change somebody's life. Because even though I am young, I have influence and the influence comes with children, like the first formers. I use my influence to try and change them to make them better persons." This year, he's doing nine Caribbean Secondary Education Certificate subjects and was actually in one of the classes when the National Commercial Bank Foundation stopped by to donate funds to the NYOJ.

"It would be very bad of me if I didn't come by and look even though I can't literally come to the rehearsals now," he laughed. "But they (the tutors) understand (his schedule) and they support me 100 per cent. So it's like a family away from family."

Well spoken and energetic, there's no wonder Dr Clarke said, "that young man can be anything he wants to be." Palmer leaves his career path to God, but is leaning towards becoming a lawyer. But don't worry, he has no intention of putting his violin down.