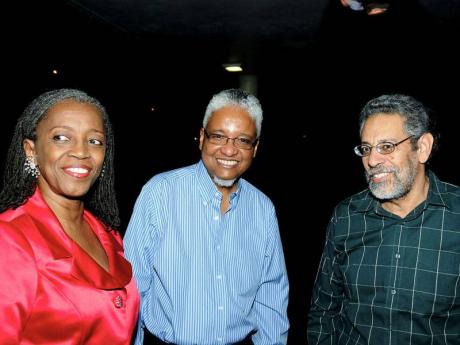 PATENTS CREATED by the University of the West Indies (UWI) are going untouched by the private sector.

This was revealed by Professor E. Nigel Harris, vice-chancellor of the UWI as he addressed directors of the Jamaica Chamber of Commerce recently.

Professor Harris' goal was to impress upon the gathering the need to create a more robust partnership between the sector and the university, and to show how such a partnership could propel growth in the region.

"We have the 25 patents. We pay for them every year, but there is no take-up from the private sector. What we are looking for...is how can we form more effective linkages here. We're not capitalising on our resources enough. Maybe we don't know enough about each other," he said.

He suggested a fair or some other forum where members of the private sector can liaise with the university to show what is happening at the tertiary institution and what opportunities were available for merging.

Professor Harris' presentation comes as the university unveils its 2012 to 2017 strategic plan aiming to be globally recognised as an innovative, internationally competitive institution, deeply rooted in all aspects of Caribbean development and committed to serving the people of the region. Noting that the region faced heavy financial challenges, he opined that UWI's role was integral.

"An imperative of our new strategic plan is determining how can the Caribbean better capitalise on the human and knowledge resources of our universities, so that regional competitiveness can be enhanced."

Professor Harris came armed with practical examples of how academia/private sector synergies have worked. Citing the Cocoa Research Unit at Trinidad's St Augustine campus, he related that they had always created innovative products, but never tried to capitalise on them financially. Professor Harris explained how that unit is transforming itself to meet the objectives of the region.

"It (the unit) is changing with the new university dynamic, partnering with private companies and also working with Eastern Caribbean countries to produce exquisite brands of cocoa," he revealed. He also outlined how agricultural scientists from both St Augustine and Mona campuses are aiding St Lucia's agriculture ministry, particularly in assessing the effect of the Black Sigatoka disease on the island's bananas.

"I believe an increasing number of our graduates are doing innovative things and our university's research activities are being translated into initiatives and products," he said. Professor Harris also explained that UWI was re-designing the curriculum to create problem solvers and to equip the approximately 9,000 annual graduates for the world after school.

"We are not training technicians. We are educating students to learn, to learn. In the new world in which these young people will live, they will have to keep reinventing themselves. The jobs available 20 years from now are not even dreamed of today," he suggested.