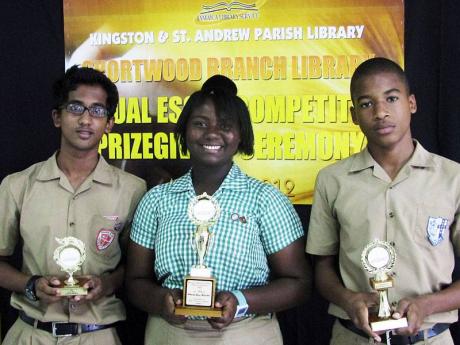 ALL EYES were fixed on Shana-Kay Ritchie of Oberlin High School as she collected her trophy for first place in the Shortwood Branch Library's fourth annual essay competition.

The aim of the competition was to exhibit the country's achievements over the last 50 years to the nation's children.

Students were asked to 'Outline some of Jamaica's achievements and say how they have helped us to be among the best in the world'.

"The competition is beneficial as we get to critique the essays, make evaluations and communicate with the students directly or the teachers as to how they did and how they can improve. It helps with the writing process, researching and how to make references, among many other things," said Melony Leitch, librarian for the Shortwood Branch Library.

"This is the fourth year and it has grown through the number of students who entered. It has also grown in terms of the sponsors that have come on board and that is very good for us," Leitch added.

More than $52,000 in cash and other prizes, such as gift baskets and books, were awarded to the top-three participants. Jelani Atkinson of St George's High School collected the prize for second place while Srinivas Malladi of Campion College placed third.