Portmore, Boys' Town in massive showdown - BT vow to take title race down to the wire 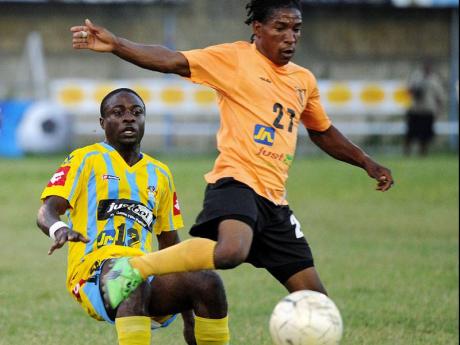 The destination of the 2011-2012 Red Stripe Premier League title could be decided today if leaders Portmore United are able to avoid defeat against second-place Boys' Town in the teams' 9 p.m. clash at the Anthony Spaulding Sports Complex.

If the Calvin Lewis-coached Portmore evade defeat, the club will claim its fifth national league title (two of which were won when the club was known as Hazard United). But if Boys' Town are able to secure victory, especially by an impressive margin, it will set up an intriguing final round of games.

In the ultimate round, Boys' Town will play away to Humble Lion and Portmore will host Waterhouse.

Lewis is not keen on leaving things for the final day of the season, but instead is keen on getting the necessary point today.

"We hope to wrap it up Monday (today); we are going to play for a win," Lewis disclosed in an interview with The Gleaner yesterday.

"We are expecting a difficult game; we know Boys' Town will be throwing everything at us, but that can also work against them because we are going to play a patient game and we can hit them at anytime. If they want to come and play open football we will very much welcome that," he added.

Coming into the fourth and final round Portmore appeared to be cruising to the title, but failure to secure a victory in their last four games has left the door ajar for Boys' Town. The Red Brigade's coach, Andrew Price, is intent on seizing the opportunity.

"When people throw you a lifeline you have to take it with both hands and that is what the team is intent on doing," Price expressed.

"Everybody had said the Premier League would be done and dusted already and now into the fourth game of the fourth round the title hasn't been decided and we have ambitions of making that decision take at least another week."

He added: "To be honest, I am very much surprised because after dropping some vital points in the previous round I had really thought by now Portmore would have taken the title, but they say luck favours the brave and we are going to play very brave for the remainder of the season and see where it leads us."

The last time the two teams met in the league, Boys' Town won 4-2 at Ferdie Neita Park on the back of a superb hat-trick by captain Michael Campbell. The other two meetings saw both teams record 1-0 home victories.