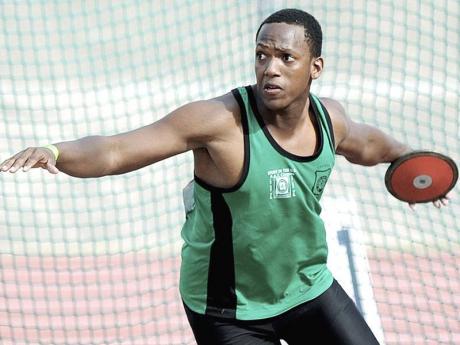 Traves Smikle set a personal best mark of 64.03 metres to finish fourth in the discus on Saturday at the final day of the 2012 UC San Diego Triton Invitational in La Jolla California.

Smikle, who turns 20 on May 7, is chasing the Olympic 'A' standard of 65 metres as he tries to secure a place on Jamaica's team to the 30th Olympiad in London this summer.

The 2010 World Junior bronze medallist improved upon the 63.10m he threw last Thursday, when he finished sixth in the discus throw. On Saturday he was beaten by Rutger Smith of the Netherlands (66.97m), Erik Cadee, also of the Netherlands and who won on Thursday (65.92m), and Julian Wruck (64.10m).

Smikle's coach, Julian Robinson, was extremely proud of his young charge's improved performance, even while competing against a world-class field of throwers. Among the throwers Smikle beat was Estonia's Mart Israel, who has a personal best of 66.98m and was fourth at the IAAF World Athletics Championships in Daegu, South Korea last summer.

"Traves is a giant killer. He first displayed this characteristic at the IAAF World Youth Championships in 2009 and he has been doing it ever since. Sport is as much physical as it is mental and if you're weak mentally then you are going to have a hard time performing. I am very proud of him," Robinson said.

The coach said Smikle's performances over the last two meets shows that he is a good competitor and that should help to boost his confidence.

His success, Robinson said, is also an indication that Smikle's training is working, admitting that over the next two months "we will continue the steady and patient work and maybe God will bless us with a throw surpassing 65 metres".

Smikle's preparation has not been without challenges, Robinson pointed out. Before he departed for San Diego, Smikle reported that his training was 'up and down'. There were good days and bad, he said. His coach shed some light on the young man's uphill climb.

"There are many things." Robinson said. "I had issues with the use of the gym at Calabar; Traves doesn't always have the funds to go to training and he is also preparing for exams, so late-night study drains him at times, plus he has to go to the gym and work again, then throw. It is very challenging, but such is life."

He said among the key areas Smikle has to work on over the next two months is his strength. He said Smikle has to get much stronger if he is to throw over 65 metres consistently.

"In my opinion he is still too weak. At the moment his bench press is about 370lbs. Ideally, I would need it to be closer to 400 or above," Robinson said.

So now over the remaining months it's a race against time to get Smikle's strength up to where he can become even more dangerous to the world's leading throwers.

"He can get stronger. I doubt he will multi-rep 400lbs, but I want him to get as close as possible. It may be that he does not need the 400lb bench to get consistently over 65m, time will tell, but what is obvious is that his strength and power level is lacking and needs to be improved to be regularly over 65m and to make a top eight at Olympics or where ever."

Smikle was down to compete at another event yesterday, but was withdrawn as he is nursing an injury.