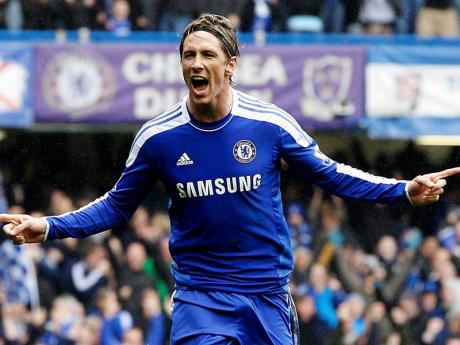 Fernando Torres got his first hat-trick in more than 21/2 years yesterday to lead Chelsea to a 6-1 English Premier League win over Queens Park Rangers (QPR).

Tottenham returned to fourth place with a 2-0 win over Blackburn, but Torres' first hat-trick since September 2009 helped show that Chelsea are the in-form team of three aiming to qualify for Europe's club top competition.

In their first match since reaching this season's Champions League final, the Blues hit four goals in the opening 25 minutes in heavy rain at Stamford Bridge.

Daniel Sturridge scored after 49 seconds, John Terry headed in a corner and the rejuvenated Torres scored twice to give Chelsea a big early lead.

Torres struck again in the 64th for his first treble since Liverpool's 6-1 win over Hull 31 months ago, and substitute Florent Malouda scored in the 80th.

Djibril Cisse got a late goal for relegation-threatened QPR.

After just eight goals in his first 61 games since joining Chelsea for $81.3 million, Torres has four in his past two matches.

"I was feeling very good, very sharp, playing well, but I couldn't score," Torres said. "Now I feel I'm not playing as well as before, but I am scoring goals, which is the important thing for the strikers."

The Spain striker's first goal was very similar to the one that earned a 2-2 draw at Barcelona in midweek, a result that carried Chelsea to next month's Champions League final. He knocked the ball around the goalkeeper with one touch and rolled it into an unguarded net with his next.

Chelsea could render the race for fourth place in the Premier League immaterial if they beat Bayern Munich next month. They would qualify for next season as defending champions and leave England's fourth-place team to enter the second-tier Europa League instead.

A large number of Chelsea fans jeered and taunted QPR defender Anton Ferdinand throughout for his accusation earlier this season that Terry had racially abused him.

Terry lost the England captaincy and faces a criminal trial after the European Championship in the summer.

The furore meant that the traditional pre-match handshake between the sides was abandoned yesterday to avoid the players coming into contact outside of the game.

Defeat further damaged QPR's chances of avoiding relegation, although they are still just above the bottom three on goal difference.

Rafael van der Vaart and Kyle Walker scored yesterday for Tottenham, which had 19 shots to none by next-to-last Blackburn Rovers.

Van der Vaart put the Spurs ahead in the 22nd minute after Gareth Bale's header from a cross by Aaron Lennon hit the bar.

Tottenham's second win in 10 matches lifted them above Newcastle - which lost 4-0 at Wigan on Saturday, on goal difference - and within four points of third-place Arsenal.

Chelsea are a point further back with three games remaining.