'I'm batting well at the moment' 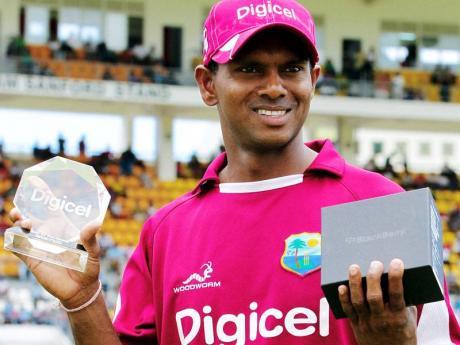 West Indies' Shivnarine Chanderpaul poses with the Man of the Series Trophy during the presentation ceremony for the third and final cricket Test match against Australia in Roseau, Dominica, on Friday. - AP

Chanderpaul reflects on ICC ranking as world's number one batsman

In the latest rankings announced by the International Cricket Council (ICC) yesterday, Chanderpaul leapt two places to regain the top spot after a three-year absence.

"It feels good to be back in the number one position in Test cricket," the 37-year-old said.

"I am batting well at the moment and when things are going well for you at the crease you try to keep going and building and look to make the most of every innings you play."

The 37-year-old left-hander amassed 346 runs to be the leading run-getter in the three-Test series against the Aussies, which the Windies lost 2-0.

He averaged 86, scored a century at Kensington Oval in the first Test that put him second on the all-time West Indies list behind the incompa-rable Sir Garry Sobers and became only the second West Indian and 10th player in history to surpass 10,000 Test runs, during the recent Dominica Test.

Chanderpaul last held the top spot back in February 2009, which earned him the Garfield Sobers Trophy after being crowned the ICC Cricketer of the Year in 2008.

The Guyanese had first reached the number one position in July 2008 by deposing Sri Lankan stroke-maker Kumar Sangakkara and remained on top for seven months.

Chanderpaul, who now has 10,055 runs from 140 Tests at an average of 50, can re-enforce his number one ranking when he heads to England for a three-Test series.

He departs with West Indies tomorrow for England, where the visitors will play three Tests for the Wisden Trophy.

This means that Chanderpaul will again arrive in England as the world's No.1 Test batsman - as he did three years ago - and will be looking to fortify his hold on top spot, as he leads de Villiers by just six ratings points.

"I'm feeling confident as we get ready for England and, like everyone else in the team, my eyes are fixed on the next few weeks and what we want to achieve," said the veteran of 140 Tests, spread over 18 years.

"The conditions there are quite different to what we saw (in the Caribbean) against Australia. You have to stay focused and use all your skills to get the right results."

Meanwhile, there were contrasting fortunes for other West Indies batsmen.

Openers Adrian Barath and Kraigg Brathwaite both lost places in the rankings and are now 81st and 94th, respectively.

In the bowlers' rankings, pacer Kemar Roach continued his rise by moving up two places to 14th, while off-spinner Shane Shillingford leapt 21 spots to 46th following his 10-wicket haul in the recent third Test against Australia.

Roach started the series in 37th spot and gained 21 places overall after finishing as the most successful bowler of the series, with 19 wickets at just under 20 runs per wicket.