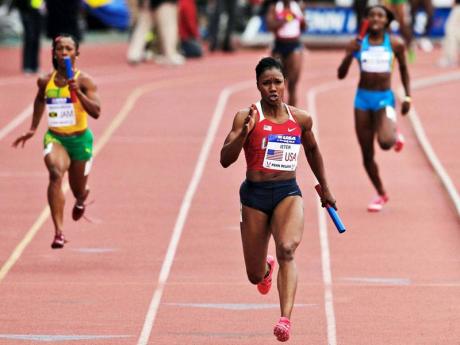 Carmelita Jeter (centre), with the USA Red team, crosses the finish line to win the USA vs the world women 4x100 ahead of Jamaica, anchored by Shelly-Ann Fraser-Pryce (left), during the Penn Relays athletics meet on Saturday in Philadelphia. USA Red team won with a time of 42:19. - AP

The Paul Francis-coached University of Technology (UTech) gave an impeccable performance at the 118th Penn Relays - one of the coldest ever - which concluded at the University of Pennsylvania, Franklin Field, last Saturday.

Though many of Jamaica's athletes found it very hard to compete at maximum in the chilly weather over the three days, UTech made their presence felt with three big wins among class opponents that included US heavyweight teams Texas A and M, Louisiana State University (LSU), Auburn and Mississippi State University.

UTech's men secured two of the victories. Their biggest win came in the final of the College of Americas 4x200 metres Championships, where the quartet of Jacques Harvey, Nicholas Watson, Denard Coote and Julian Forte, who ran a brilliant anchor leg, brought smiles and warmth to the Jamaican spectators as they stopped the clock at 1:21.71, turning back the challenges of Texas A and M, second in 1:22.85 and University of South California, which placed third in 1:23.24.

That win seemed to have ignited the UTech camp as minutes later they registered two big individual wins, capturing prizes for the fastest male and female athletes at the meet.

Minutes after helping his team to victory in the 4x200m, Harvey, who ran the lead off leg, showed that his good opening relay leg was no fluke as he stamped his class in the men's college 100 metres final, winning the event in 10.26 seconds.

Soon after it was Carrie Russell who showed her worth, as the former World Junior 100 metres bronze medallist stopped the clock at 11.41 seconds to capture the women's college 100 metres.

Competing in the college men's 110 metres hurdles, the University of Illinois standout won in 13.55 seconds. It was one-two for Jamaican athletes as the University of the West Indies' Hansle Parchment , the World University Games champion, was second in 13.61 seconds.