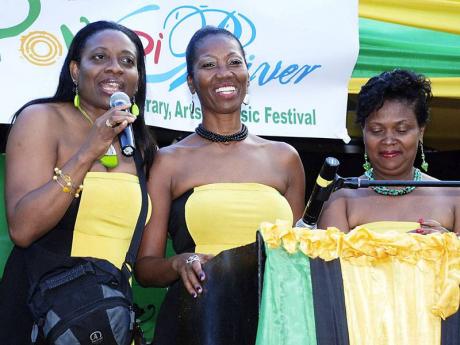 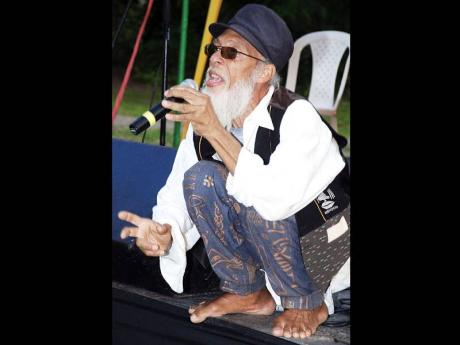 Oku Onuora, barefooted and all, gives his audience at Kingston Pon Di River a taste of his legendary poetry. 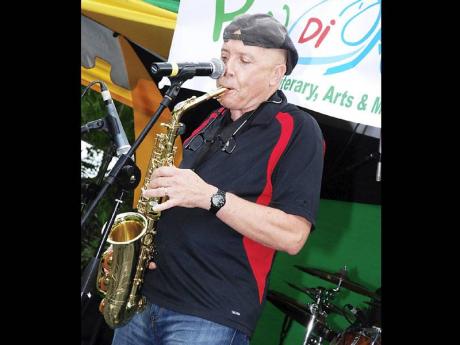 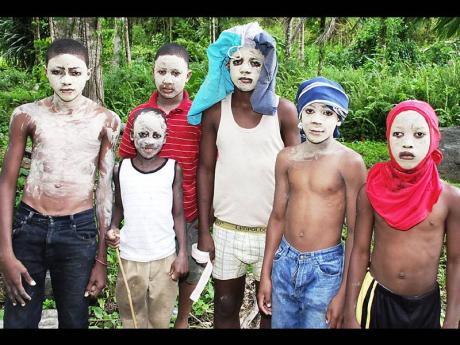 These boys came up on us out of the bushes. They rubbed brown river stones on their skin to smoothe it they said 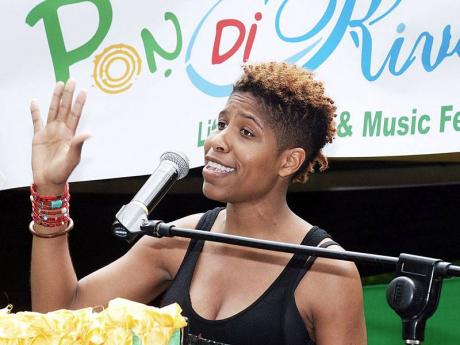 Boone Hall Oasis is, as its name suggests, a wellspring of something different from its surroundings, and so was Kingston Pon Di River, held there on Saturday and Sunday. A precursor to the event took place at Studio 38 on Friday night.

Janet Silvera, one of the organisers of the three-day event, along with her partners Millicent Lynch and Dollis Campbell, stated that Friday and Saturday nights were well received by the patrons.

"We opened with an appetiser of sorts on Friday night at Studio 38. It was an adults-only event and it was well received. Saturday night was unbelievably powerful, owing to the drumming and the fact that we ended the event with the Revivalist band who showcased the Jamaican culture and also paid tribute to the ancestors.

"Kingston Drummers created magic on Saturday night and the Cuban band Latin Roots changed the pace. It was a really good opening for today [Sunday] the big day," Silvera said.

It was a bleak Sunday afternoon, and by midday not many patrons were in the venue.

Closer to the 3 p.m, that changed.

Dub poetry and excerpts from books had a willing audience.

While enjoying the literary pieces being presented, patrons also had the chance to browse and buy at the many booths that were set up.

The open-mic segments of the programme was well received by the patrons who had travelled near and far for the opportunity to perform.

One young man called Richie Innocent, who had travelled from St Elizabeth, delivered his piece titled Good Ol' Days, which was well received.

"This is a piece that I won a gold medal for in the parish of St Elizabeth. It is a piece about bringing back the love and unity that us as a Jamaican people need. We have found ourselves mimicking and copying the patterns and lifestyles of other cultures. I was inspired to write this piece for the people who have been holding on to their heritage and culture. The Good Ol' Days is for people to reminisce about the good times of the past," he told The Gleaner.

Another performer, Emma Benn, travelled from Brooklyn in the United States to deliver her piece titled Constructive Criticism.

Her piece spoke about the hypocrisy that existed in churches and was met with claps and shouts of 'hallelujah' from the audience.

Lisa Hanna, minister of youth and culture, also read excerpts from her favourite book, Mirrors of the Soul, by Khalil Gibran.

"It captures in our minds what makes us truly Jamaican. A lot of the events that take place in Kingston really don't bring that community spirit, where people come together in a setting where you can relax in a very rustic place that you feel warmth and you kind of feel that sense of where your ancestors and all the other things that make us and give us purpose.

"We do it in the rural areas more than we do it in Kingston and I think events such as Kingston Pon Di River really need to happen more. It's a way of giving people a voice. I really congratulate the organisers, and it's one of those events that people should put on their calendar," she said.

Perhaps one of the pieces that garnered the most applause came from Professor Carolyn Cooper's Country Helper.

"I really wanted to show that the problems of being a helper and being an employer are two sides and we really need to understand each other so that we can improve working relations. I thought the audience reception was very positive. It's encouraging me to write some more stories. Kingston Pon Di River buss me as a creative writer, so mi haffi go through," she told The Gleaner.

At the close of the event, organiser Silvera stated that she was pleased with the turnout.

"Oh, my God, I am ecstatic. I feel as if we have succeeded in putting on an event that was classy and has really satisfied the needs of the persons in Kingston. We have also succeeded in showcasing Kingston in a very positive light, and that is exactly what we wanted to do.

"We want to showcase Kingston as the cultural centre of the Caribbean because it is. We want to ensure that we showcase what Kingston has to offer," she said.