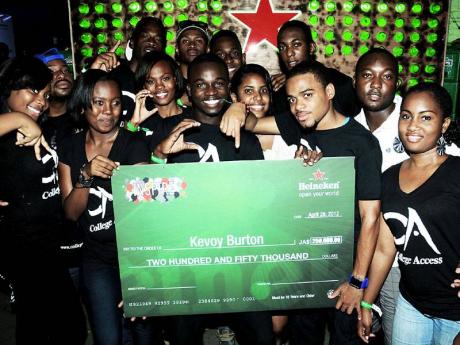 In a grand celebration that marked the end of the Heineken Inspire competition, a throng of patrons flocked downtown to the Kingston railway terminus last Saturday night. Not many of them left before Sunday morning.

The occasion also served as an official announcement of the competition's winners and the presentation of cash vouchers to them.

Winners in the categories of art, fashion, music and film were chosen based, in large part, on the number of Facebook 'likes' they could accumulate throughout the voting period.

The band, which has also won a Jamaica Cultural Development Commission competition, said its main objective from the competition was to get additional publicity.

"We had the confidence that we would win from the start. We weren't that surprised that we won as, from looking at the other contestants, our piece was great," said Williams.

College Access' film entry, which starred Ghett'A Life actor Kevoy Burton, was also among those in the winner's circle.

The piece, which was shot and edited in one day, was a sure win for the group as they thought that they were far ahead of the competition.

Burton and editor Kouri Clarke were both happy, saying that the whole College Access team was to be credited as without their teamwork, it would not have been possible.

"We feel elated. It was very tiring for me and it shows that hard work does pay off and once we have a dream, we can achieve it," said Burton.

Simone Neilson was sceptical about the potential of her winning the fashion piece as her entry was 'last minute'.

"I was sceptical at first because I entered last minute, but when I took the photo and submitted it, I was really proud of it, so I was hoping for the best. The support from all my friends was overwhelming," she said.

Kimona Wickham was hesitant about entering because she had thought that her art piece wasn't strong enough. She said after entering the competition, she believed that the win was not coming her way after seeing another entry at 300 likes while she had only racked up 60 at the time. Her next move then was to support her friends that had also entered.

Her entry, a light painting, was done by using a camera and a flashlight. She slowed down the camera's shutter speed and started to draw pictures with the flashlight.

Throughout the night, patrons who attended the event were treated to music from DJ Nicco as he delivered a fine musical performance from behind the turntables.

A surprise performance from Bounty Killer was the night's highlight as he thoroughly entertained with a plethora of songs from his extensive catalogue.