Disaster in waiting - Riverton landfill could reignite any day 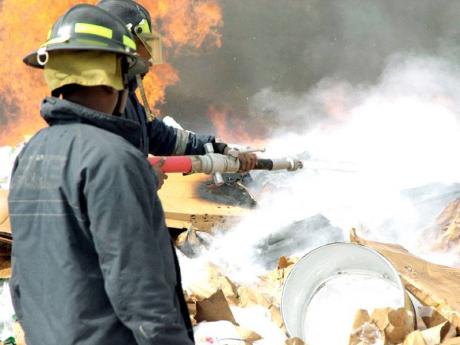 Mere months after scores of persons were left with breathing problems following a major fire at the National Solid Waste Management Authority's (NSWMA) Corporate Area landfill at Riverton City, there are fears the country is just a whisker away from a similar episode.

Newly installed NSWMA Executive Director Jennifer Edwards has admitted that it is only a matter of time before the area faces another fire and subsequent smoke nuisance.

With only 40 per cent of the dump covered as a result of efforts from the last fire in February, there is a 60 per cent chance of another blaze, Edwards warned.

"We have cleared the entrance to that site three times since I've been there ... . That's the issue with disposal sites that operate the way we do. It's not a sanitary landfill and it doesn't have separations. So all of the material that are combustible are there," Edwards said during a visit to the Gleaner's North Street, central Kingston, offices last Thursday.

Edwards took over the reins of the agency on the tail end of the last fire, which millions of dollars was spent to contain.

"The site had not been covered for two years, which was one of the contributing causes to the start of that fire," said Edwards.

She added that the NSWMA was exploring a number of alternatives to assist in coverage at a cheaper cost and more consistently.

But the issue is compounded as access roads to the landfill cannot be properly policed and efforts to remove some of the individuals who operate there are being met with resistance.

In the past there has been concern that the fires could be started by persons looking to capitalise on the opportunities that arise as a large number of people and heavy equipment are needed to fight the blaze.

However, Edwards argued that there was no evidence of the fires being deliberately set.

She said often times the residue of burning garbage is collected and dumped at the landfill which ignites flammable material there.

Outbreaks often cause thick poisonous smoke to blanket sections of the Corporate Area and sections of Portmore in St Catherine.