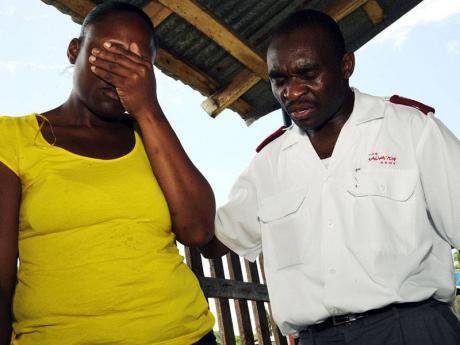 Salvation Army Lt Sawotion Ceridor (right) offers a prayer to Althea McIntosh, the mother who lost her two-year-old son in a fire that destroyed her home in Port Maria, St Mary, on the weekend. - Norman Grindley/Chief Photographer 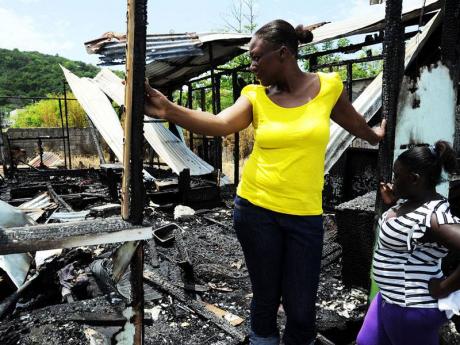 Althea McIntosh (left) and her 14-year-old daughter Nastaski Murphy seem to be looking back on what was their home that was destroyed by fire in Port Maria, St Mary, on Saturday night. - Norman Grindley/Chief Photographer
1
2

Althea McIntosh stood in front of the burnt-out shell of the three-bedroom board home she once shared with her three children.

Her gaze was affixed to the back bedroom, her face looking painfully and hopelessly bewildered.

It was in that very room that her two-year-old, Tyresse Flynn, perished in the fire that destroyed their home just after 8 p.m. on Saturday.

Wading through the muddy swamp around the yard in the Frontier Phase II community in Port Maria, St Mary, McIntosh tried to come to grips with what really happened that night.

"I don't understand what happen. I just leave him for five minutes to go and get some food. He was sick, I couldn't carry him. He had fever, him asthmatic and I couldn't carry him in the night dew because it was drizzling," the 33-year-old unemployed mother shared with The Gleaner on a sunny Monday afternoon.

Her other two children were not home. Daughter Nastaski Murphy, 14, was playing out in the lane nearby, while she had sent son Javier McGaw, 9, to his father to get some money.

By the time the neighbours ran around the back and tried to get inside, the fire had completely engulfed the board house.

When the fire truck came and put out the blaze, Althea was left staring at the charred remains of her child. She became hysterical and had to be hospitalised and given a sedative.

Yesterday, still in tears, she said despite the medication, she was unable to sleep and has a constant headache.

"You know say me always have him, always. Is just because him sick why me leave him," she mumbled.

She is also at a loss as to what could have caused the fire.

"I don't know, 'cause we don't have electricity. One lamp did light but to how the kerosene oil did low it couldn't cause it. It was just a little tip in there. I had to tie piece of cloth to the wick for it to reach to the oil," she shared.

Across the road by the shop, cousin Patricia Blake bawled uncontrollably as she remembered that tragic night.

"Junie (Althea) come over and say she didn't have any money to buy any food. At the same time she get a call and she say to me 'God is good, I going to collect some money to buy some food'."

It was too much for Blake to continue. She cried for a while.

She continued: "She tell me the baby fall asleep so she just going run go 'round the corner and collect the money and buy some food. She say five minutes time. Me say 'alright, do that and come back'."

Blake said minutes after going to the back of the shop she got a call that the house was on fire. She said she ran out and stood there for a good while calling for help but some persons ignored her. She tried to enter the premises but the fire was raging. She said Troy from up the lane ran over and tried to break down the door. Others came out and tried to help, but the fire was out of control.

Althea stood in the lane looking at the place she had called home, thanks to an aunt, since she was 18 years old. Her sister Keelia McIntosh, 32, hugged her and the two stood in the heat of the sun crying, while her daughter Nastaski held her hand.

The family is left with nothing but broken hearts. Everything was lost in the fire. Javier has gone to stay with his father, while Nastaski will go by her grandmother.

Althea has not been able to speak with Tyresse's father since the baby died.

"I keep calling him but he won't answer my calls," she said sadly.

According to the preliminary report from Deputy Superintendent Andrew Wildman of the Port Maria Fire Department, approximately 8:50 p.m. on Saturday, they got a call about the fire. They made a prompt response to the location and saw the house ablaze.

Wildman said the team was alerted to the possibility of a child being inside the house and, during their operation, they came across Tyresse's burnt remains.

As to the cause of the fire, Wildman told The Gleaner, "We are looking at the possibility that there was a kerosene lamp that was left unattended. However, at this point investigations are continuing, as we are looking at several theories but we cannot say for a fact as to what happened."

He added: "The fact that a life was lost, we don't want to rush into any determination at this time without looking at all possible causes."