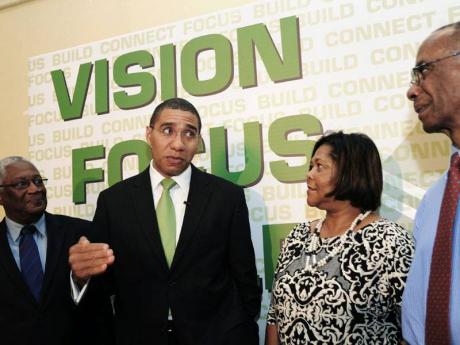 PROFESSOR BERNARD Headley, chair of the Strategic Review Commission which has been set up by the Jamaica Labour Party (JLP) to review its election performances, has expressed doubt that his team will be able to deliver on all the wishes of party leader Andrew Holness.

"I am not sure that we will be able to deliver on all the things the leader has outlined," Headley said during a press conference held at The Jamaica Pegasus hotel in St Andrew yesterday.

"Their job will be to take a 360-degree look at the Jamaica Labour Party and make recommendations for its reform, indeed, transformation," Holness said.

The review became necessary after the party, under Holness' leadership, suffered two massive election defeats at the polls in three months. The party lost the December 2011 general election 21-42 to the People's National Party (PNP), and in local government elections in March the party failed to win a single parish.

Among the 13 broad strategic objectives of the commission is to review the image and perception of the party held by various social groups and to suggest ways of strengthening the JLP brand.

The committee has also been asked to examine the attitudes of Jamaicans to politics, especially in light of low voter turn out in the recent elections.

The JLP also wants to find out why Portmore, St Catherine, and Westmoreland have voted consistently for the PNP since 1989.

Holness yesterday said the party has decided to set up the independent body because it wants the naked truth.

"We expect them to be brutally frank with us," he said.

"The Jamaica Labour Party is in a state now where it has to introspect and we have to face up to whatever challenges we have. And we are now prepared to listen to the conclusions that will be drawn and be prepared to change with those conclusions and recommendations," Holness said.

No reason to be sympathetic

Headley, meanwhile, said the commission has no reason to be sympathetic to the party as it goes about its duties.

"We are not cheerleaders, we are not party handles, we are not image remakers ... we are not PR (public relations) experts and neither are we consultants," Headley said.

The commissioners will have access to the party's financial records, including donors.

He added: "Our job is not to fix the bus or fix the party, not to get it back on the road and keep it running."

The JLP, notwithstanding the independent commission, will be conducting various consultations and reviews of its own. Holness said it is anticipated that the reports will be completed by November this year.