HIV/AIDS soon to be classified a communicable disease - Ferguson 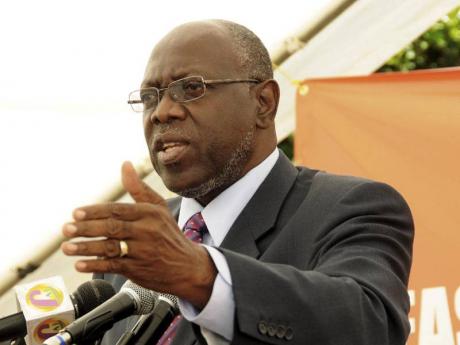 HEALTH MINISTER Dr Fenton Ferguson has promised that steps are being taken to introduce legislation to classify HIV/AIDS as a communicable disease for the purpose of reporting and monitoring.

"This is going to be a very important piece of legislation because the question of stigma and discrimination would be, by that one stroke, a very important point that will again further the cause as it relates to persons affected by HIV/AIDS," said Dr Ferguson.

The minister was among guests at a recent research dissemination hosted by C-Change. The organisation is a USAID-funded project to improve the effectiveness and sustainability of social and behaviour change communication (SBCC) across development areas. The project works with global, regional, and local partners in the major health areas including family planning and reproductive health and HIV prevention. The findings will be used to inform HIV and SBCC programming in Jamaica.

Dr Ferguson also outlined that there was a move to merge the HIV/AIDS programme with the National Planning Council. He also noted that Cabinet's Human Resources Committee has also been deliberating on the White Paper to establish an HIV workplace policy.

"That (paper), we believe, is important as we go forward as a country," he said. Dr Ferguson opined that Jamaica had one of the best cadres of trained persons in the area of HIV research, and cited Jamaica's initiative in doing a sustainability survey related to HIV/AIDS.

The minister's comments come as some interesting figures coming from the latest Knowledge, Attitude, Practices and Behaviour 2012 study were made available. Preliminary data show a reduction in reported condom use among women with multiple partners. Condom use was lowest among adult women (33 per cent) compared to young women (43 per cent) and adolescents (48 per cent). Dr Sharlene Jarrett, senior director of monitoring and evaluation, National HIV/STI Programme, who presented Jamaica's epidemiological overview, noted that 42 per cent of those surveyed said they used condoms every time, but 10 per cent did not use one, the last 10 times they had sex. Dr Jarrett was also concerned about a decline in the number of 15 to 24 year-olds who were not endorsing the three most effective ways of prevention; abstinence, condom use and having one steady partner.

But there was encouraging data as well. Dr Jarrett noted that more than 9,000 persons are on anti-retroviral drugs, a decrease in HIV in the general population and fewer mother-to-child infections. Fewer respondents reported multiple partnerships, fewer young people reported having sex before 15, and the proportion of adults tested for HIV and who know their status in the past 12 months has more than doubled. But she warned that, after tabling, all the data Jamaica was not yet in the clear.