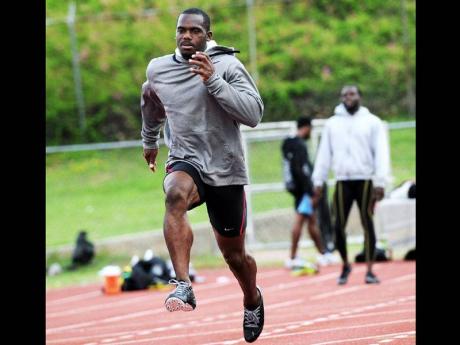 Overshadowed by some of his more celebrated countrymen, Nesta Carter, Jamaica's sometimes forgotten man of sprinting, is not bothered by the little attention he receives, focusing instead on his ambitions to become the best.

Carter, who boasts a 100m personal best of 9.78, has taken notice of the little recognition he gets. After all, that time which was achieved in Rieti, Italy in 2010, makes him the fourth-fastest man in the history of sprinting.

Problem is, two of three men who have gone faster than himself are Jamaicans; triple Olympic champion and world record holder Usain Bolt (9.58) and former world record holder and the man with the most sub-10 seconds Asafa Powell (9.72). American Tyson Gay (9.69) holds the third-fastest time.

"I do understand what running 9.78 means, but here in Jamaica, two of those persons in front of me in terms of fastest times are from my own country and as a result I don't really get the recognition that I should get being the fourth-fastest man in the world," Carter told The Gleaner during a recent interview.

"I am overshadowed, but I just have to continue to do my best, put in the work and try and do better, move up to number one; you have to just take it a step at a time," he added.

Carter, who has consistently run below 9.91 since 2009, underlines, however, that he is more determined than ever to keep working hard and believes he has what it takes to run significantly faster this season.

"It encourages me knowing that I ran 9.78 and I know that I have more in the tank," said Carter, who earlier this year won a silver medal at the IAAF World Indoor Championships in Istanbul, Turkey - his first international individual medal. "It's just for me to keep working on myself and trying to keep improving and get some more out of me.

"I think that I can go beyond 9.78, I just have to stay injury free and once that happens then everything is possible, anything is possible," Carter added, before pointing out that he has been focusing on improving his starts, which many consider to be his main drawback.

"I have been working on a few things, especially my start, which is the weak part of my race. I am just trying to get those parts stronger in my race. If I improve in this area I know that I will go faster," he reasoned.

Carter, who ran his first 200m this season at the recent University of Technology Track and Field Classics, recorded a time of 20.48 in wet and windy conditions.

The MVP Track Club man will again be in action at this weekend's JN Jamaica Invitational inside the National Stadium, where he will compete in the 100m with countrymen Bolt and Michael Frater, as well as Trinidad and Tobago's Richard Thompson and United States' Darvis Patton.