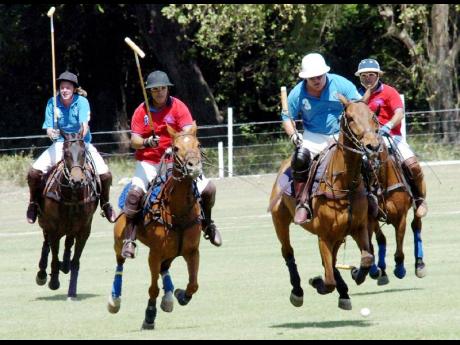 Scotia Private Client's Jorge Donovan on the go in the Jamaica Open Polo, sponsored by Scotia Private Client Group, on Sunday at the Kingston Polo Club, Caymanas Estates. Donovan, the most valuable player, scored four goals in his team's 6-4 win over the Audi team. Looking on at right is James Robertson, opposing captain. - photos by Rudolph Brown/Photographer 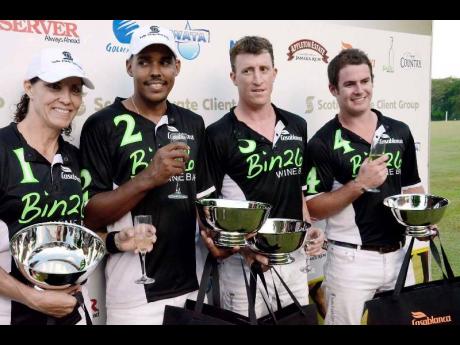 With the weather - which forced a postponement on the previous Sunday - improving on the weekend, the match not only progressed smoothly, but provided a treat for the large crowd.

The Scotia team, captained by Mitta Rousseau, duly made amends for their near miss against Bin 26 in last year's final, in which the team was basically the same save for young Jason Wates replacing his father, Mark Wates, on this occasion.

In a somewhat physical game marked by a number of penalties arising from foul plays, both teams were evenly matched up to the halfway stage.

However, the Scotia team took control going into the third of the four chukkas, coming from 2-3 down at this stage with Donovan levelling at 3-3 after a sustained run down the middle of the field.

Donovan also featured in a brilliant set play shortly after his reverse flick finding Rousseau, who made no mistake from close range.

Although the visiting Argentinean pro, José Laritirigoyen, excelled for the Audi team by keeping their hopes alive with a 40-yard penalty midway the last quarter, Scotia were not to be denied. Donovan, the MVP of the final, sealed the issue with another solo run a minute or so to go.

Donovan, a five-goal pro, was definitely the standout player with 21-year-old pro Jason Wates providing energetic support, but Rousseau and Paul Lalor chipped in with a goal each. For the Audi team, Laritirigoyen scored three and captain James Robertson one. The other members of the losing team were Jordon Samuda and Ricky Wates.

Winning captain Rousseau said his team put out that extra effort in the third and fourth chukkas for the win.

"The field was playing a bit slow, owing to the recent rains and the match could have gone either way at a crucial stage. But Jorge had a great game when we needed someone to step up big time," he said.

"Tactically, we put a lot of man-before-ball type of play and this worked in our favour, especially with Jason keeping a tab on Laritirigoyen for the most part. Happily, we made up for last year's defeat and I'm elated to have led the team to victory," he added.

Laritirigoyen, who was playing in Jamaica for the eighth consecutive year, said: "We had our opportunities but didn't score where it mattered ... . We missed four or five goals and gave up the initiative to our opponents in the latter stages."

In the third-place playoff between the losing semi-finalists, outgoing champions Bin 26 defeated Wyndham by six goals to 31/2, captain Lesley Fong Yee scoring three, Craig Russell one, and Shane and Kurt Chin scored one each. Mark Melville replied with two goals for Wyndham.