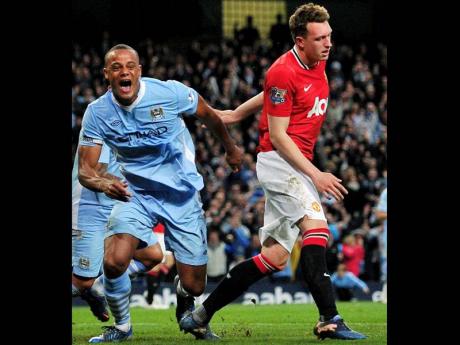 MANCHESTER, England (AP):The Manchester derby went to City. Next, they hope, is the Premier League crown.

In what had been billed as the biggest Manchester derby ever, Kompany connected off David Silva's corner kick for the only goal, in first-half stoppage time, at the Etihad Stadium.

City then held on for a potentially title-deciding victory; they lead United on goal difference and once again have matters in their own hands, having erased an eight-point deficit in three weeks.

"Absolutely buzzing. ... We've been waiting for this moment,'' Kompany said. "It's far from over and we know that, but just to give our fans two wins over Manchester United this season - we have to finish it off."

City still have a difficult job remaining as they next visit fifth-place Newcastle United, then host relegation-threatened Queens Park Rangers in the remaining games. United finish against Swansea at home and Sunderland away.

"It's great to win tonight, but Newcastle is now our focus," City goalkeeper Joe Hart said.

City have an eight-goal differential over United.

"I think that we deserved to win this game. We scored, we played well and we had other chances to score in the second half," City manager Roberto Mancini said.

As the cross-town rivals have been locked in a two-way fight for the title for most of the season, this game had been hyped even more than others in the 131-year history of matches. The entertainment level was not nearly as high as the stakes.

The game featured few clear scoring chances for either side and the tension on the pitch spilled over to the sideline in the second half. United manager Alex Ferguson and City counterpart Mancini got into a heated exchange after a tough challenge by Nigel de Jong on Danny Welbeck.

With both managers making hand gestures to suggest the other should stop talking, Ferguson eventually had to be dragged back to his own technical area. City assistant coach David Platt restrained Mancini.

"Sir Alex told me something not kind," Mancini said. "But I can understand, because at that point, tension is high."

Ferguson said he was upset that Mancini was yelling too much at the match officials.

"It was feisty. It was a competitive game, which we expected, not a lot of goal chances," Ferguson said. "We are disappointed we never tested the goalkeeper; to be honest, our crossing was poor."