Bookies clash with BGLC over multi-year licensing of betting shops 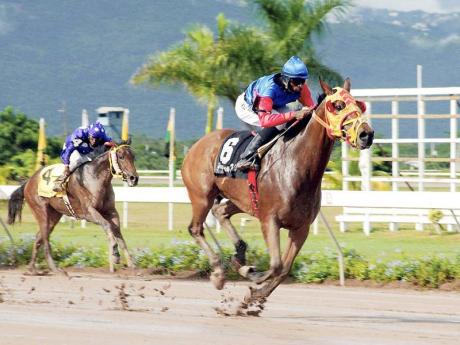 A two-year-old change in gambling laws makes bookmakers eligible to buy five-year operating licences, but the owners of betting shops have said they cannot take advantage of the concession because of expensive rights fees they must pay at the horse track.

But the regulatory authority, Betting, Gaming and Lotteries Commission (BGLC), said bookmakers are misinformed and the fee does not factor into approvals.

"The commission does not insert itself into the commercial arrangements of the bookmakers. We would be acting ultra vires if we did not issue a permit," said BGLC Executive Director Derek Peart.

The United Bookmakers Association is fighting a plan by Caymanas Track Limited to triple rights fees from 3.5 per cent to 10 per cent of total bets placed, saying the sector is already in arrears on the fees and cannot afford such a huge spike in the cost of business.

Their position is that the fee should be set at two per cent.

The issue is in arbitration but, in the meantime, the bookmakers have been mandated to pay an interim five per cent rights fee until the Ministry of Finance can resolve the impasse.

President of United Bookmakers, Xavier Chin, said with betting shop operators averaging sales of J$5 million per race day, and 81 race days planned for 2012, they are expected to pay rights fees amounting to an estimated J$20 million this year, based on the current five per cent charge.

Chin has linked the issue to licensing of betting shops, but the regulatory authority counters that the real issue is non-compliance with other basic requirements, including the disclosure of financial information and compliance on taxes.

Still, a "rights-fee agreement" between bookmakers and race promoters, whether the latter are based in Jamaica or overseas, must be produced to qualify for licensing.

Peart said if a bookmaker is in arrears on the rights fees and the promoter has not withdrawn the agreement, BGLC will still issue the permit.

However, "not having the capacity to pay rights fee may be a sign of other things going on in the business and may show up in the financial statements", which is why audited financial statements must be submitted at a specified time and must demonstrate a working capital ratio of at least 1.25:1, he said.

The Betting, Gaming and Lotteries Act (BGLA) was amended in May 2010, allowing bookmakers to apply for licences ranging from one year up to five years.

Previously, bookmakers had to renew their licences on an annual basis. The extended period, bookmakers say, helps companies plan their business across a longer time horizon, and positions them to make better decisions on financing their operations.

Chin, meantime, said he was unaware that the rights fee was not germane to licence renewals, for which he blamed the BGLC

"Nobody knows what are the requirements," he said, when asked to clarify his previous comments.

"They never tell us anything," he said of BGLC.

"They are fully conversant. They know," he said. "I am sure they know and, remember, the industry is governed by the Betting, Gaming and Lotteries Act."

He said the bookmakers are just not qualified, generally, to take up the five-year licence, and that the operators are failing to meet even minimum criteria for renewal of one-year permits.

"When the commission is renewing a licence, there are certain things we look for to determine whether we can issue a licence for five years, four years, one year," said Peart.

"We look to see whether breaches have occurred during the period, see if they have paid the required levies and taxes, look for justifiable complaints, submission of financial information, tax compliance, disclosure of material developments in the entity during the course of the permit, and at working-capital ratio, and solvency," he said.

Under the new provisions, multi-year licences still go through annual review. The only difference is that a new permit is not issued after each review, the regulator said.

However, a bookmaker may see the tenure of his licence reduced if the BGLC is not satisfied with the operations of the business.

Since the law was amended, only two bookmakers have qualified for extended licences. They each got two-year permits, Peart said.

"The whole process of being able to issue a licence for more than a year is pretty new and we all must go up the learning curve. As we speak, we even have cases where we have to give six-month licences, and they know why," said Peart.

"A lot of times they don't even hold up to the minimum criteria and we have to issue licences for less than a year. It is not unprecedented that we have had to issue licences, ... in some instances, for six months and nine months," said the regulator.

Bookmakers must also produce a Tax Compliance Certificates, for both the directors and the business, as another condition for licence renewal. Tax compliance is one of the criteria which determines the length of the permit.

Chin has cited the tax issue as another burden on bookmakers, who pay a 16.5 per cent tax on gross profits.

"We also look for justifiable complaints. Punters complain to us that sometimes that they are not being paid or they have to wait lengthy periods to be paid when the BGLA clearly state that they should be paid immediately upon presentation of a winning ticket," Peart said.

"We can't have people winning and they have to wait two, three weeks, or however long, after they have presented their tickets."

He said consideration may be given in cases where cheques are to be drawn, as the process of getting signatures may delay the issuance of checks.

A lag in payments to punters is not justifiable nor is selling bets from premises which are not licensed, the regulator said.

The six bookmakers together place about J$4 million to J$5 million of bets per race day, Chin said.