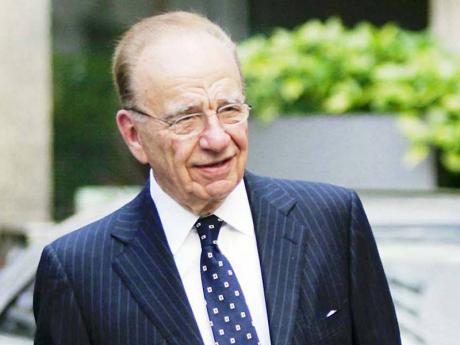 In a report on the malpractice at Murdoch's now shuttered News of The World tabloid, legislators accused Murdoch and his son James of overseeing a corporate culture that sought "to cover up rather than seek out wrongdoing."

Parliament's cross-party Culture, Media and Sport committee unanimously agreed that three key News International executives had misled Parliament by offering false accounts of their knowledge of the extent of phone hacking — a rare and serious censure that can see offenders hauled before Parliament to make a personal apology.

The panel said the House of Commons would decide on the punishment meted out to the three executives: New York Daily news editor Colin Myler, a former News of The World editor; the British tabloid's long-time lawyer Tom Crone and Les Hinton, the former executive chairman of News International, former publisher of The Wall Street Journal and former board member of The Associated Press.

Members of the panel said Rupert Murdoch, 81, had insisted he was unaware that hacking was widespread at the News of The World, blaming his staff for keeping him in the dark. That explanation was not accepted.

The legislators said if that was true, "he turned a blind eye and exhibited wilful blindness to what was going on in his companies."

Legislators said Hinton had misled them over his repeated claim that hacking was not rife at the News of The World, while Myler and Crone had failed to present factual accounts of what they knew. All deny that charge.

Still, some analysts say the report's savage criticism of the Murdoch empire could have implications in the United States.

He also owns British newspapers The Times, The Sunday Times and The Sun; the stake in British Sky Broadcasting; and outlets around the world from broadcaster Sky Italia to Australian cable provider Foxtel.

"A question for Americans is whether his empire and methods will come under scrutiny in this country," said Louis Ureneck, a journalism professor at Boston University.

News Corp acknowledged the panel's report had uncovered some "hard truths," including that its "response to the wrongdoing was too slow and too defensive, and that some of our employees misled the select committee."

However, it denounced "the unjustified and highly partisan" attack on Rupert Murdoch - noting objections raised by panel members.

In a ruling opposed by four Conservative Party members of the 11-member committee, the panel cast serious doubt on Murdoch's credentials as an executive.

"We conclude, therefore, that Rupert Murdoch is not a fit person to exercise the stewardship of a major international company," the report said.

The judgement on Murdoch implies that News Corp, which he heads, is also not fit to control British Sky Broadcasting, in which the company has a controlling stake of 39 per cent.

Ofcom, the broadcast regulator, said it is reading the report with interest.

"Ofcom has a duty ... to be satisfied that any person holding a broadcasting licence is, and remains, fit and proper to do so," the statement read. "Ofcom is continuing to assess the evidence."

Louise Mensch, a Conservative Party member of the panel, told reporters the committee had been divided over the harsh criticism of Murdoch. Four Conservative members opposed the suggestion that Murdoch was unfit to lead a global company, but that stance was endorsed by four Labour Party members and one Liberal Democrat. The panel's chairman, a Conservative, did not vote, in line with convention.

Conservative panel member Philip Davies said the conclusion was "not only over the top, but ludicrous."

Legislators agreed, however, that Murdoch's son 39-year-old son James, a former News International executive chairman, was also badly at fault in the scandal.

They said phone hacking at the tabloid dated back to at least 2001, and insisted that James Murdoch could have halted the practice as early as 2008.

"As the head of a journalistic enterprise, we are astonished that James Murdoch did not seek more information," legislators wrote.

But they stopped short of accusing the younger Murdoch of misleading lawmakers when he claimed not to have fully read a 2008 email which he had received and outlined that hacking was widespread.

The committee also criticised Hinton, who worked as a top Murdoch aide on both sides of the Atlantic for decades and resigned as the publisher of The Wall Street Journal last year amid the hacking scandal.

The report said he misled them over his repeated claim that hacking was not rife at the News of The World.

Myler and Crone had also failed to present factual accounts of what they knew, the report said.

In a statement, Myler said he stood by his evidence and believed ongoing UK police inquiries would "establish the truth" of his account. "I have always sought to be accurate and consistent in what I have said to the committee," Myler said.

Committee chairman James Whittingdale said "it is for the House (of Commons) to decide what consequences follow" from misleading Parliament.

News Corp said it was "carefully reviewing the select committee's report and will respond shortly."

"The company fully acknow-ledges significant wrongdoing at News of the World and apologises to everyone whose privacy was invaded," it said in a statement.

News Corp has been buffeted by the scandal, which has claimed the jobs of a string of its senior executives and several top British police officers amid allegations that Scotland Yard failed properly to investigate tabloid wrongdoing for years.

Murdoch closed down the 168-year-old News of The World tabloid last July amid public revulsion at the hacking of voicemail messages of celebrities and victims of crime, including murdered schoolgirl Milly Dowler.

A total of 43 people, including at least 25 past and present employees of News International have been arrested by police investigating phone hacking, bribery and computer hacking.

Murdoch has paid out millions to settle lawsuits from about 60 celebrities, sports stars, politicians and other public figures whose voicemails were hacked. Dozens more lawsuits have been filed.