Best of then, best of now - Yasus Afari emphasises blend of 'Ancient Future' 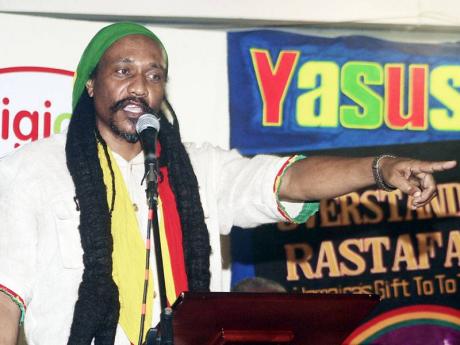 As he gave those gathered inside Bookophilia, Hope Road, St Andrew, on Monday evening a run-through of Ancient Future (a 'taste and buy', as it was humorously put), Yasus Afari put the title and content of his seventh studio album in historical context.

There are 16 tracks on Ancient Future, starting with Wah Gwaan and closing on Guide I 'n' I oh Jah, featuring the Dub Vijaan Band. In-between, Afari combines with several guests, among them Benjamin Zephaniah (Who Put The Pressure?), Freya Horsey (The Wish), Toots and the Maytals (Light Your Light), Kokomu and Black Goddesses (both featured on Set It Off), King Kapisi (Rise Up (New Zealand)) and Black Uhuru (Brand New Experience).

Black Majik, which features Angel S and Annabelle Mitchell, gets prime billing, as at the end of the listening session Yasus showed the video for the track, the first visual he has done for one of his pieces in about a decade.

Among the poems he does by himself on the album are Feel Like Crying, Hard and Tuff (which, along with Black Majik, was part of an impromptu call and response style performance at the end of the evening's formalities), Carry Jamaica and Isus Reborn. The last was relevant to his one-month-old child, to whom Ancient Future is dedicated, an older daughter, Tanhoi, accepting on her sibling's behalf.

"An album was dedicated to you before, so don't get jealous," Yasus said as she accepted the CD.

Ancient Future is being distributed digitally by Zojak World Wide, company representative claiming "we are the largest distributor of reggae". The album went live on iTunes on the day of the launch, that high-volume distributor getting priority treatment in the distribution process, although Monifa Hylton, Zojak label representative, said "we are going to put it with everybody". It is also on the front page of Zojak's website.

"I really like the difference in this album. When you think of dub poetry you think of rhythm driven, one drop. This tells you there is no continental divide," Hylton said, noting the varied musical influences. Already, she said, there have been 30 requests from radio stations which want Ancient Future.

And in giving thanks all around, Yasus Afari spoke out against illicit payment for press placement. "We not into payola. So we respect the journalist who come support with the pay that the media house give them and don't hijack poor people," he said.