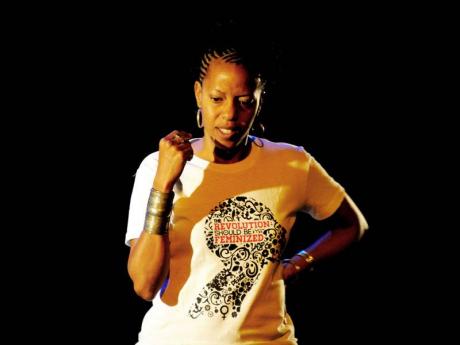 Danielle Toppin speaks about her boyfriend Bob during her presentation of 'Because He Likes To Look At It', from 'The Vagina Monologues', at the Philip Sherlock Centre last Friday. 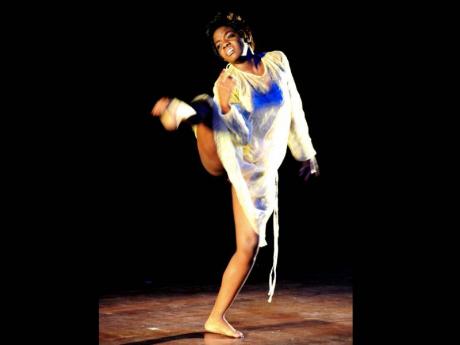 Renée McDonald performs a dance called 'Stillborn' as part of the Sankofa Arts and Facilitation's presentation of 'The Vagina Monologues'. 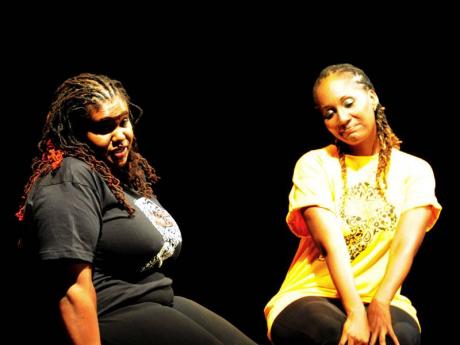 Shauna-Kay Burns (left) and Althea Hewitt perform 'The Little Coochie Snorcher That Could', from 'The Vagina Monologues', at the Philip Sherlock Centre on Friday. - photos by Winston Sill/Freelance Photographer 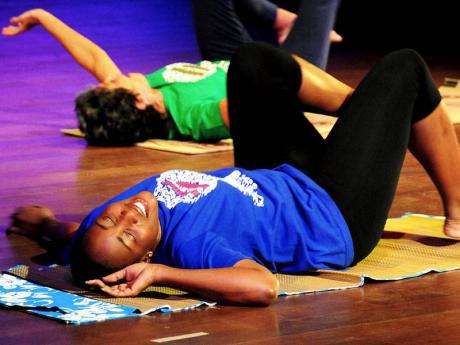 Roxene Nickle Alvaranga (foreground) and Hilary Nicholson perform 'Vagina Workshop' during a staging of 'The Vagina Monologues' at the Philip Sherlock Centre for the Creative Arts on Friday.
1
2
3
4

It was a packed audience that turned up at the Philip Sherlock Centre for the Creative Arts at the University of the West Indies to see The Vagina Monologues last Friday night.

Although many women would rather not discuss their vagina, the majority of those in attendance were females; there was also a fair amount of men who had come out to experience the play.

The play, which was written by Eve Ensler, can be described as a celebration of female sexuality in all its complexity and mystery. The Vagina Monologues is based on interviews with more than 200 women about their memories and experiences of sexuality and has been performed in cities all across the world, inspiring a dynamic movement called V-Day. The V-Day movement aims to stop violence against women.

As the name suggests, The Vagina Monologues is a series of monologues with the vagina as the central focus. The play got off to a strong start. The first monologue called Hair deals with a woman whose husband insists that she shave her vagina. After refusing to shave her vagina, her husband had an affair.

Yet, another monologue called My Vagina is Angry involves a woman who describes her nether regions as 'angry' because of the many things such as tampons and gynaecology instruments that were thoughtlessly created to be used on the vagina.

Perhaps one of the most touching monologues of the night came from My Vagina was my Village. This monologue described how a Bosnian woman was viciously raped by men for days. The monologue was written for the many women of Kosovo and Bosnia who have been subjected to rape and sexual torture over the years.

Other monologues of the night included: I Remember, I Believe, The Flood, Stillborn and I Was There in the Room.

The play was well delivered and included a special guest appearance by Leonie Forbes.

The play evoked almost every emotion in its audience members, those The Gleaner spoke to saying it gave them a feeling of 'newness'.

One patron said she would now see her vagina in a new light.

According to Leonie Forbes, she decided to make a guest appearance because it was the right thing to do.

"I am female, I am woman, I am a senior woman, I love my country and I love women all over the world," said Forbes.

Actress Noelle Kerr said this was her fifth year doing the play and each year is more incredible.

"Every year has just been more rewarding and more fulfilling and I walk away having brand-new friendships and closeness with a whole set of women and it's unforgettable. Every year is just unforgettable," Kerr said.

Director of the play and V-Day coordinator, Fabian Thomas, told The Gleaner that proceeds from the play would go to two beneficiaries.

"Vagina Monologues is part of V-Day which is a movement she [Ensler] started. Every year from Valentine's Day to the end of April, she allows people all over the world to do copyright-free performances of Vagina Monologues and five other productions to raise awareness and spark dialogue about violence against women and also to raise funds for organisations that work with women who have survived violence or are working through violence. Ensler interviewed more than 200 women for Vagina Monologues. It's a mix of funny, sexy, in your face - some of them very distressing - but it's a powerful piece of work," he said.