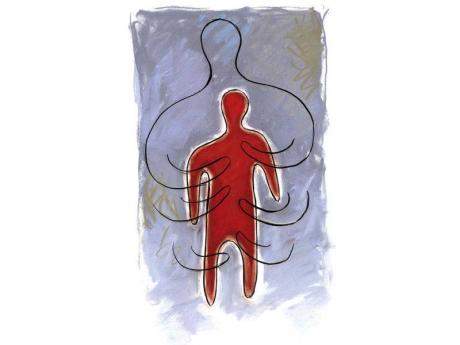 A man in his late 50s wept uncontrollably. He had just disclosed in therapy that as a boy, living in rural Jamaica, he was forced to repeatedly have intercourse and perform other sexual acts with his older female relative. He said that it was the first time that he was disclosing this painful piece of his life to another human being. Not being able to process this pain as a child, he was wrapped in anger, shame, guilt and feelings of helplessness and powerlessness. He started acting out and soon was kicked out of school as a 'rude boy'.

His life as a child and into adulthood was one filled with repeated interfaces with the legal and prison systems for wrong-doings including illicit drug use. He managed to 'migrate' to the United States but also lived there on the wrong side of the law and was deported to Jamaica after a long time in prison, unskilled and unable to fully function as a good citizen.

This is not really an unusual case. Many children grow into adults suffering with the scars of abuse. The Office of the Children's Registry recently released data indicating that it received more than 7,000 reports of sexual abuse of children between 2007 and 2011. Many of these sexually abused children don't receive adequate counselling and therapy, if any at all. However, the emotional problems associated with the trauma don't just go away.

Female and male victims of sexual assault suffer a range of psychological consequences in the short and long term, as noted in the The World Report on Violence and Health. These consequences include guilt, anger, anxiety, depression, post-traumatic stress disorder, sexual dysfunction, somatic complaints, sleep disturbances, withdrawal from relationships and attempted suicide. In addition to these reactions, studies of adolescent males have also found an association between suffering rape and substance abuse, violent behaviour, stealing and absenteeism from school.

The abused child tries to make sense of the trauma using various coping strategies. For example, the survivor may keep telling herself/himself that the experience wasn't so bad by hanging on to this thought: 'Daddy didn't really mean to hurt me'. She/He may also try to find an excuse for the abuser: 'He was drunk' or 'He was really tired and stressed out because he works so hard'. She/He may blame him/herself thinking: 'Maybe if I had not been so pretty and attractive he wouldn't have abused me' or 'Maybe if I had not been such a bad girl/boy he wouldn't have abused me'.

However, as the child becomes an adult, these childhood coping strategies begin to falter. This is perhaps when professional help is sought.

Paedophiles and other sex offenders are nurtured by a society. Poverty, multiple shifting and societal norms that support sexual violence, male superiority and sexual entitlement need to be tackled. Sexual harassment, for example, is still viewed here as something 'cultural' that men have some kind of divine right to perpetrate on women and this is a society where a recently revised law cannot even admit that a husband can rape his wife except in a few prescribed situations. This is an enabling society for sex offenders.

These societal norms are difficult to tackle. However, it is encouraging that the playwright, Basil Dawkins, has taken on this topic in his play, Where Is My Father. Dawkins, the team at the Child Development Agency and some mental health professionals recently used the play as a springboard for a 'theatre as therapy' workshop around the theme of sexual violence. Let's do more.

Eulalee Thompson is health editor and a therapist in private practice. Email eulalee.thompson@gleanerjm.com.