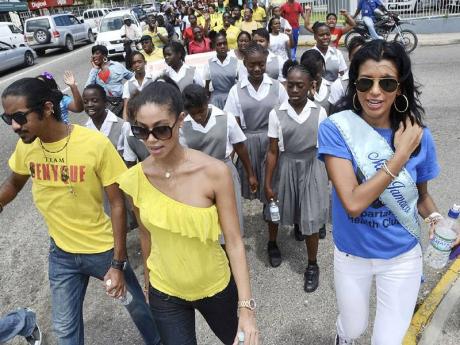 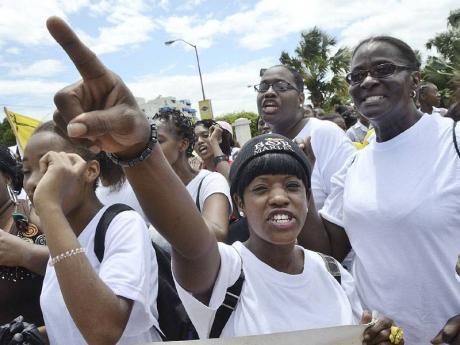 Participants in the march and rally. 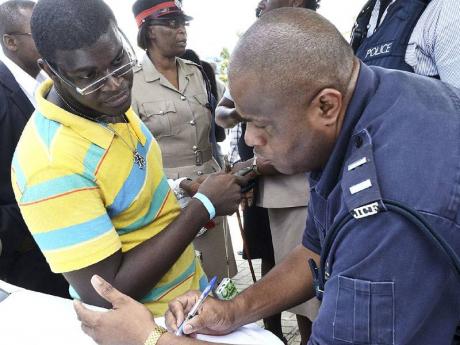 Organiser of the march and rally Brandon Allwood (left), chief advocate for Help Jamaica's Children Foundation, is warned for prosecution for failing to obtain the proper permit. The march had just culminated at Emancipation Park in St Andrew, which started at the Bustamante Hospital for Children yesterday. - Rudolph Brown/Photographer
1
2
3

For the first day of Child Month, scores of children and adults turned out at the Bustamante Hospital for Children in St Andrew yesterday to participate in a march and rally for child rights, awareness and protection in Jamaica.

Organised by Brandon Allwood, chief advocate for the Help Jamaica's Children Foundation, the less-than-one-hour march, which had the support of several celebrities, dignitaries and organisations, culminated at Emancipation Park for the rally.

"That march from Bustamante to Emancipation Park was the beginning of your journey. Full emancipation is when all children in Jamaica will be protected and it is possible for us to do it," urged Susan Goffe, chairperson of the human-rights lobby group Jamaicans For Justice.

"What heartens me is that it is the young people who have organised and turned out in their numbers. Don't stop, remember there is a child somewhere who cannot speak out for themselves and you can become their voice. I look forward to seeing the young people leading the charge for the young people of Jamaica," said Goffe.

Allwood believed enough was not being done to protect children, hence the need to bring greater awareness to the many issues affecting them.

"We are doing this march because awareness is one of the most important tools we have in advocacy to call Jamaicans to action. We have to make them aware of a situation, to ask them for help. A lot of Jamaicans think our problems are either political or economic and we don't really pay attention to the social concerns that plague our country, especially when it relates to children," he told The Gleaner.

On arrival at Emancipation Park, Allwood found himself in trouble with the police and was warned for prosecution for failing to obtain the proper permit for staging the event. However, he insisted that he followed the proper procedure.

"They warned me that I was in breach of the law and I could be prosecuted, so I will be meeting with the superintendent tomorrow (today) to discuss it. But I don't know what the mix-up is. They are saying I needed additional permission from the Half-Way Tree Police Station but it was the Half-Way Tree Police Station who directed me to the traffic department after I got approval from the NWA (National Works Agency)," he said.

The police later allowed the rally to continue.

Calling for everyone to break the silence and report child abuse, Greig Smith, registrar of the Office of the Children's Registry, revealed that since his office was set up in 2007, it has received more than 24,000 reports of child abuse, with more than 7,000 reports estimated to have been received in 2011 alone. This is a drastic increase from the 455 reports received in its first year of operation.

The event was the first of a number of activities planned by the Help Jamaica's Children Foundation to commemorate Child Month.