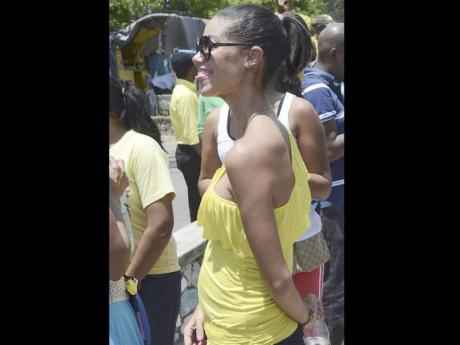 Yendi Phillipps, former Miss Jamaica World and Miss Jamaica Universe, participates in the march and rally organised by the Help Jamaica's Children Foundation to bring awareness to child rights, awareness and protection in Jamaica. The march started at the Bustamante Hospital for Children and ended at the Emancipation Park in St Andrew on Tuesday, May 1. - Rudolph Brown/Photographer

Former Miss Jamaica Yendi Phillipps braved the heat of the noonday sun yesterday to participate in the march and rally for child rights, awareness and protection.

Organised by the Help Jamaica's Children Foundation, the former Miss Jamaica World and Miss Jamaica Universe joined scores of children and adults to march from the Bustamante Hospital for Children in St Andrew to Emancipation Park in New Kingston.

"I think this is a great march, it is very important. The fact is, the children are the future of our country and I think as a people we need to realise that we as citizens have a responsibility to our own. It is not just a matter of relying on the Government or authority figures, we ourselves can play a part," she said.

"Hopefully, a lot more can come out of it and the voiceless do realise that they actually have a voice and have rights and they are entitled to a happy, fruitful existence."

Phillipps said she was hoping that each year, during Child Month, something of this magnitude could be replicated across Jamaica.

Bright and bubbly, the 26-year-old Phillipps, who made the news last week after she announced on her Facebook page that she was pregnant for singer/songwriter Daniel 'Chino' McGregor, proved she was still fit by enduring the full length of the march.