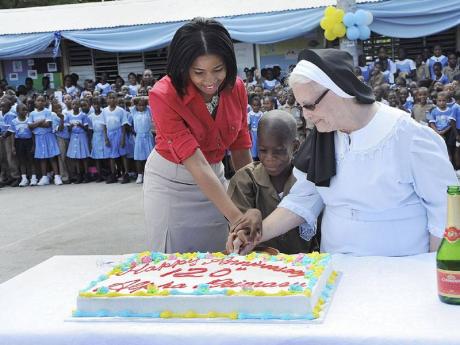 It's been called top school, Alpha Elementary and even Alpha Junior School, but one thing remains the same - Alpha Primary School has produced results.

Tuesday, May 1, marked the 120th anniversary of the school which was formed in 1892. Mary Ann Justina (Jessie) Ripoll bought the 43-acre property years earlier in 1880, starting the Alpha Cottage with a single orphan. Ripoll would later take the name Sister Mary Peter Claver when she joined the Religious Sisters of Mercy when the order established a mission there. After the orphanage had been fully established, there was need for an elementary school to meet the academic needs of the Kingston community, hence the institution's beginning.

The entire school community came out to participate in yesterday's occasion, which took over from regular morning devotion. There was great emphasis on remembering the history of the institution, including the various past principals.

Current principal Millicent Graham expressed confidence that the school would continue to play a role in developing students equipped to handle the world's challenges.

"Over the centuries, generations have benefited, not just from the knowledge and skills passed on but also from the dedication and commitment of our board of management, teachers and support staff," Graham said.

She also opined that the school would continue to serve the community well, honouring the legacy and continuing the mission of its founders.

Representing the Sisters of Mercy, Sister Bernadette Little chronicled how that "jungle" purchased by Ripoll, that was once a hiding place for thieves, had, over time, brought forth some of the nation's best educators.

"The story of this institution ... would fill many volumes," she said. She lauded the current staff and administrators for continuing to carry on the values and standards of the institution.

"The quality of education given here is of the highest standard," she said.

Education Minister Ronald Thwaites was also full of praise for the institution.

"(We) Salute the teachers for the important job they do and I remember and give thanks for the sisters who have helped this school to maintain itself and to prosper," he said. And for a birthday present, Scotiabank Foundation's Joylene Griffiths Irving announced that the entity had re-equipped the school's computer lab and refurbished the staffroom.

"We had computers but they were outdated," Graham said. "So we needed a little help."

They now have 13 state-of-the-art machines. Graham was equally grateful to the wider business community for its support to the school.

"I think they hold us in high esteem because we try to involve them in what we're doing. We have definitely benefited," she said. As part of the anniversary celebrations, there will be an open day on May 18 and and an evening of excellence on May 29.