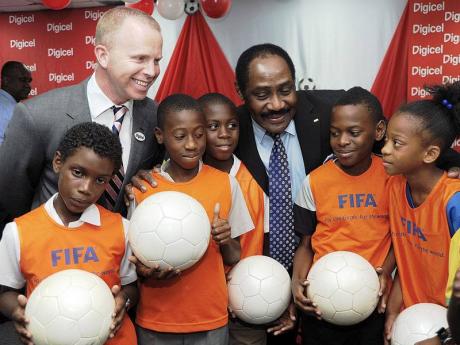 Jamaica Football Federation (JFF) president, Captain Horace Burrell, has hailed yesterday's launch of the Digicel/JFF Grassroots Football Programme as being one of the most significant achievements of his administration at the helm of local football.

Thousands of young footballers from across the island will benefit from personalised coaching and nurturing, as the JFF, in collaboration with title sponsors Digicel, will embark on an initial three-year football developmental programme geared at six- and 12-year-olds.

"This will go down as one of the most important initiatives ever undertaken by any football administration, and in the Caribbean this is probably a first," Burrell shared with The Gleaner following yesterday's launch at the JFF's head office. "A revolution in football has commenced because when you have youngsters in an organised way with their parents behind them and the communities, this is going to ignite a kind of passion that no one thought of."

He added: "I am going to give this programme 10 years, so by 2022 football is going to become a great force to be reckoned with in Jamaica."

Two clinics will be held per parish each month in each year until 2014, with the first phase set to end in December 2012. Each festival will feature 100 children, who will be under the tutelage of over 20 coaching educators.

The first festival is set to commence on May 12 at the Paul Bogle field in St Thomas. The second staging will be held at Barbican Beach in St Andrew on May 26 and will see the youngsters being introduced to beach football.

National coordinator, Andre Virtue, explained the objectives of the programme.

"My main objective, from conversations with the JFF and FIFA, is to get the grassroots programme developed across each parish," Virtue revealed. "The second objective, and obviously the most important, is the kids and that they themselves see this as an opportunity to just love the sport.

"If we are able to do that it will speak to the foundation that the national team can pull from," he added.

Digicel's marketing director, Conor Looney, is pleased that his company is playing a role in the development of local football.

"It is a number of years' investment; it is a three-year programme and we are happy to be part of it in the initial period, and who knows, long into the future as well," said Looney.