Defiant Boys' Town send Premier League down to the wire 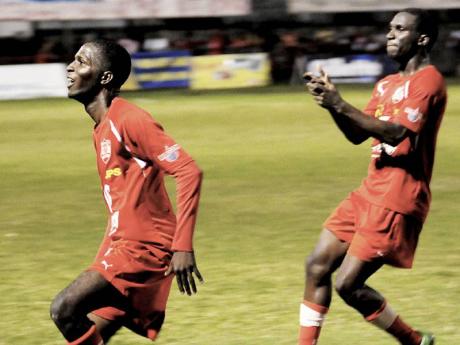 Ahead of the crucial penultimate round of the Red Stripe Premier League (RSPL) game against Portmore United, Boys' Town coach Andrew Price was firm on one thing: Portmore United would not take the title on their home turf, even if the match was played on less familiar grounds just up the road at the Anthony Spaulding Sports Complex.

While Boys' Town have been one of a number of teams to have spoilt Portmore United's title party, they are the only ones with a realistic chance of preventing the team from the Sunshine City from winning.

"We decided that Portmore would not beat us in our home game or win the title at our home," a defiant Price declared at the end of their 2-1 win over the team which had at one point enjoyed a 12-point lead and have now seen that whittled down to three points and a goal difference of four.

"I told my players that this game would be like a cup final," Price added, pointing to the significance of the fixture.

National representative Oneil Thompson was out of shape, but he gave a manful performance in the middle for the victors, giving everything that his body would allow. He defended, created, hauled his team forward on his hulking shoulders and put his body on the line to fire them ahead in the 43rd, taking a few blows to the body in the process.

Daemion Benjamin made sure the title would go to the final day when his 76th minute deflected free kick took a wicked deflection past a hapless Gariece McPherson in goal for Portmore United. Defender Rickardo Harriott had pulled Portmore United level in the 67th minute.

"We got a victory tonight and whatever happens next week happens. Hopefully, then we will be able to get a victory and that Waterhouse will win and score some goals," Price expressed with an optimistic eye on the title.

But while Price was largely happy, he made it clear that his team only has itself to blame for its current predicament.

"We are in this position now because of our own doing. We had points to take and didn't take them," said Price matter-of-factly.

For the third successive week, Portmore United coach Calvin Lewis was left incredulous as he sought to process the circumstances under which the title remained out of their grasp.

"I can't believe it," Lewis said with surprising calm before beginning his formal interview at the end of the game.

"I would not say that we are stumbling right now. We did most of the work in the first three rounds," Lewis said, fending off views that the champions were repeating what happened to the club three years ago when they were pipped on the line for the title by Tivoli Gardens and what happened to Harbour View before.

"Tonight's performance was disappointing even though we worked hard. We have a few days to get ourselves ready for the final day of the season.

"We expect every game to be difficult and our next game is no different," Lewis said ahead of their final game of the season against year-to-year rivals Waterhouse.