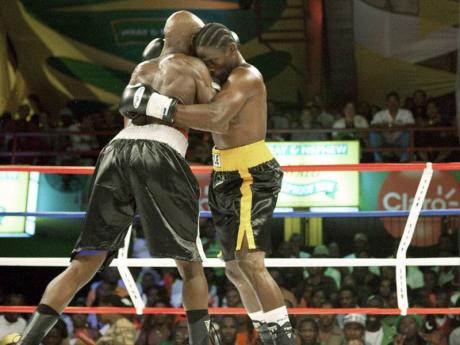 Ian 'Hagler' Smith, one of the crowd favourites in the Wray and Nephew Contender boxing series, will seek a place in the semi-finals tonight when he goes up against his nemesis, Kevin Hylton, at the Chinese Benevolent Association auditorium. Fight time will be 8:30, with two amateur bouts.

There is a buzz of excitement when this fight is mentioned because last year these two boxers met in the 2011 edition of the series and Hylton won by disqualification.

Hylton, who is a very cagey fighter, kept holding Smith in that encounter and on one occasion after a clinch, he was thrown violently to the canvas and Smith was disqualified for this infringement of the rules.

Smith said afterwards that he had learnt his lesson from this incident and pledged that it would never happen again. Hylton is a talented fighter, but he is very defensive and cautious. Smith will have this to cope with tonight.

He is naturally aggressive and if Hylton fights defensively once more, Smith will be sorely tested. Hylton, on the other hand, could make it a difficult night for his opponent in other ways, as he has a good jab which he uses to build up points and goes into the encounter with the opportunity to pull off a big upset.

A lot is at stake for both men as the winner tonight is guaranteed at least $200,000, which is the fourth prize on offer.

Smith goes in as the prefight favourite because of his experience and his fighting style.

He did lose some training days two weeks ago, when he hurt his left hand in training. He has recovered from this, however, and the doctor told him last week that he was ready to go tonight. He said, yesterday, that he was fine and is ready for the challenge.

"I am fit," he declared, and added that an impressive victory was on the cards. He will get the chance to prove this tonight at 9.30, the time that the main bout is scheduled to go on.

This will be the final quarter-final encounter of the made-for-television series that is promoted by MJK Productions, approved by the Jamaica Boxing Board and sponsored by J. Wray and Nephew, Foska Oats and TVJ.