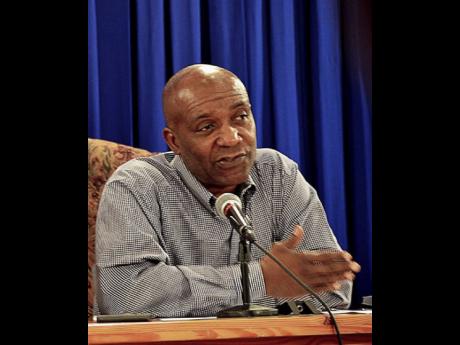 JIS: Director of the Jamaica 50 Secretariat, Robert Bryan, is warning that persons could face legal action if they use the Jamaica 50th anniversary logo without permission.

Bryan, who was speaking at a JIS 'Think Tank' held Tuesday at the agency's head office in St Andrew, said the logo, which has been rebranded with a new trademark and carries the slogan, 'Proudly Celebrating Jamaica 50', is protected by copyright law.

He said the secretariat had seen evidence of the "lack of control" in the use of the logo at the recently held Expo Jamaica 2012 staged by the Jamaica Manufacturers' Association, and said the organisation would be putting measures in place "to protect the commercial arrangements that are in place".

"We intend to take steps to try to prevent that. Hopefully, we can do that in a non-contentious way, because the approach we have taken is to offer the new brand identity and make the logo available in as easy a manner as possible ... the idea is to get people included rather than to exclude," Bryan explained.

The Jamaica 50th anniversary logo is a trademark of the Government of Jamaica that has been registered in Jamaica, The United States of America, Canada and the European Union.

Bryan said the secretariat is in the process of completing applications for the trademark in China.

Persons found using it on any merchandise, product, service or advertising, without prior permission, could be liable for legal action.

Bryan pointed out that the secretariat will first contact persons to inform them of the breach before enforcing the rights of the protected trademark.

Bryan said persons who were given permission to use the old logo are being contacted to make the necessary changes.

"We have contacted everybody that we are able to ... for those persons who have got permission to use the logo with the old tag line. it is just a matter of swopping and making sure you have the correct one," he said.