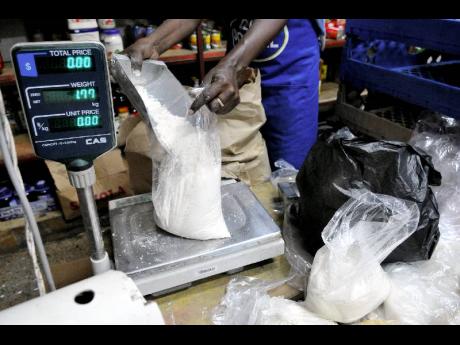 An employee of a wholesale store in downtown Kingston weighs bulk flour for sale. Flour and rice (pictured at left) are among the basic food items to be recommended for continued GCT exemption.

A DECISION by the special tax committee of Parliament to recommend to the House of Representatives that some items, to include basic foods, remain exempt from general consumption tax (GCT) has left representatives of the country's private sector disheartened.

"If there is an intention to retain a wide range of exemptions, that obviously is very disappointing," Joseph M. Matalon, president of the Private Sector Organisation of Jamaica, told The Gleaner yesterday.

Members of the Dr Peter Phillips-chaired committee yesterday reviewed a draft report which is to be sent to the House of Representatives.

The draft report states that the committee firmly believes an efficient transfer mechanism must be put in place to address the needs of vulnerable income groups.

Economist Joseph Cox said the position of the committee, as contained in the draft report, represents "a victory for the poor".

Cox had vehemently opposed the proposal of the Private Sector Working Group (PSWG) which, in its submission to the committee, recommended the removal of GCT exemption on items such as basic foods.

"The support mechanism that had been advocated was woefully inadequate, and if the Government had gone ahead and placed the GCT on some of those items that have been mentioned, the simple fact of life is that it would have increased the misery on the most vulnerable," Cox said.

The group has suggested the elimination of GCT exemption on items and a lowering of the GCT rate from 17.5 to 12.5 per cent. It also recommended that additional resources be put into the Programme of Advancement Through Health and Education to assist the most vulnerable.

Yesterday, Matalon said he could not comment on behalf of the PSWG, which he also represents, until he has had discussions with the rest of the membership.

In the meantime, the Phillips committee has recommended that, like other patties, beef patty be subject to GCT.

It also recommended that electricity, oil products and imports, telephone services, as well as agricultural inputs, be given differential treatment. The report, however, does not indicate what this treatment would mean for consumers of those products.

The committee is to propose special treatment for schoolbooks.

"We had taken the decision that (if) the exemption for printed materials would be removed, that we wanted to preserve one, specifically for books used in the schools," Phillips said as committee members perused the draft report yesterday.

In the meantime, Phillips has signalled that there is unlikely to be any consequences for Jamaica if Parliament accepts the report and tax measures are applied in line with the expressions of Parliament.

Committee member Karl Samuda had questioned the possible impact on Jamaica as a result of the committee taking a position that runs counter to that held by the Inter-American Development Bank.

"No, this report can't compromise any position of anybody else. This report is a report of the appropriate committee of the Parliament in Jamaica," Phillips said.

Jamaica is currently in discussions with the International Monetary Fund, critical to which is the matter of tax reform.

"There is no friction that has been made apparent to me on any of these matters," Phillips said.

The finance minister, however, stressed that it was important that the committee complete its work quickly.

"The Parliament needs to understand that there is a whole host of not only domestic, but, I dare say, international expectations hinged on this report," Phillips said.

If the report is accepted by the House of Representatives, Cabinet will prepared a White Paper outlining the Government's policy direction on taxation. Phillips will also have to go to Parliament with a tax package.