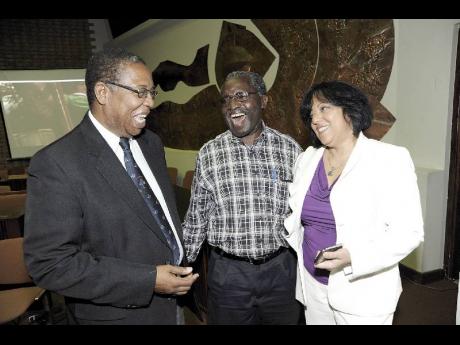 Hillary Alexander (right), permanent secretary in the Ministry of Science, Technology, Energy and Mining, shares a joke with Richard Gordon (left), project manager of the Energy Efficiency and Conservation Programme, and Professor Ishenkumba Kahwa, dean of the Faculty of Pure and Applied Sciences at the University of the West Indies, Mona, during the launch of the programme at the Jamaica Conference Centre in downtown Kingston yesterday. - Ian Allen/Photographer

In the photo caption, we incorrectly identified Mr. Richard Gordon, project manager of the Energy Efficiency and Conservation Programme, as Richard Brewster. We regret the error.

Science, Technology, Energy and Mining Minister Phillip Paulwell has warned that government agencies and ministries that do not cut their energy bills will feel it in their pockets.

"With your current consumption as your benchmark, please be advised that starting today, your energy cost must only go down. If you increase consumption, ... you can expect a negative impact on your overall budgetary allocation," he said, quickly adding that he was speaking with the firm authority of the finance minister.

Paulwell was addressing the launch of the Energy Efficiency and Conservation Programme, which is the end product of the Energy Efficiency and Conservation Technical Assistance (EECTA) agreement first signed in 2009 between the Government and the Inter-American Development Bank. The programme has a total cost of US$20 million and seeks to reduce energy consumption in the public sector. Paulwell reeled off staggering figures of Jamaica's energy crisis.

"Some 90 per cent of Jamaica's energy is supplied by imported petroleum. Next to debt servicing, energy consumes the largest amount of our foreign-exchange earnings," he said.

Among other data, the EECTA collected analysis of government facilities' energy consumption and conservation measures. An audit of Jamaica's energy situation showed the Government used more than 411 gigawatt hours annually, more than 10 per cent of total electricity consumed in Jamaica.

"The total GOJ bill for electricity has moved from about J$560 million in January 2009 to the current figure of nearly J$1.2 billion at February 2012. That's an increase of more than half a billion dollars or some 108 per cent. This increase is annualised at J$7.2 billion. This ... spells crisis," he said.

He implored heads of agencies, ministries and other public-sector institutions to examine the findings of the audit report and to determine their next step. He noted the Government had access to the electricity bills of every government agency and would be monitoring usage. He challenged ministers and permanent secretaries, especially, to develop and implement an energy-efficiency road map and to set targets for their energy consumption.

Paulwell noted that the programme would specifically deal with replacing incandescent bulbs and fluorescent lighting systems with LED fittings, and improving the insulation and seeding of building envelopes to reduce heat loading and air-conditioning requirements. There will also be the replacement of old air-conditioning systems for more modern, efficient ones.

"(We will also be) implementing a system for monitoring and evaluating to ensure the sustainability of the initiative and to identify and train, within all our ministries, teams of energy wardens ... to oversee the gains of the programme and that the gains are achieved."

Another component of the programme is an education-awareness initiative to sensitise the public and private sectors regarding energy efficiency (EE) and energy conservation (EC) cost and benefits. There will also be workshops and seminars for stakeholders on EE and EC procurement and management. Paulwell also noted that apart from the savings to the country's energy bill, the programme would also provide jobs.

"This programme will employ energy auditors, engineers, architects, as well as suppliers of air conditioning and energy-efficient fixtures to install over 5,000 air-conditioning units islandwide and over 100,000 lighting fixtures. This is sure to have a ripple effect on the entire economy."

CAPTION: Hillary Alexander (right), permanent secretary in the Ministry of Science, Technology, Energy and Mining, shares a joke with Richard Gordon (left), project manager of the Energy Efficiency and Conservation Programme, and Professor Ishenkumba Kahwa, dean of the Faculty of Pure and Applied Sciences at the University of the West Indies, Mona, during the launch of the programme at the Jamaica Conference Centre in downtown Kingston yesterday. - Ian Allen/Photographer