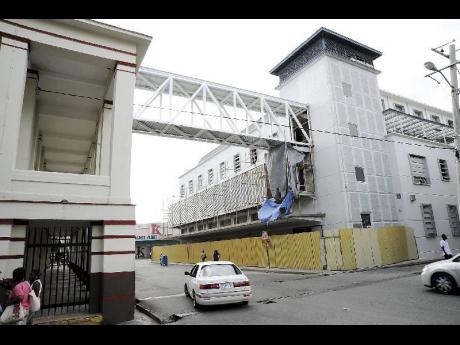 JUSTICE MINISTER Mark Golding has removed Ferris Ziadie, the head of the advisory committee for the implementation of the Justice Square project, and replaced him with Dean Peart, a former government minister.

He had served as member of parliament for North West Manchester between 1989 and 2011.

"There are engaged professionals that work on the project, but there is a committee that was established from the start of the project, and Dean Peart is chairing it for me," Golding told The Gleaner.

He added: "I wanted to work with someone on it that I have a good working relationship with. I don't know Mr Ziadie well. Mr Peart has significant experience in construction. He was recommended to me and I decided to go with him."

Delroy Chuck, the opposition spokesman on national security and justice, told The Gleaner yesterday he has no problem with the appointment of Peart.

"Nothing is wrong with that. The minister does have the right to choose who he wants to advise him," Chuck said.

Golding said he was thankful for the work Ziadie has done.

"I think he did a good job, but because I know he is very closely associated with the Jamaica Labour Party, I felt that I wanted to bring somebody else in because it is an advisory committee to me."

In his role as adviser on the project, Peart will not be paid.

In the meantime, Golding said it has not been his approach to change the composition of all government boards that fall under his ministry.

"I don't have many boards, but several of my boards, I have just retained en bloc. For example, the Legal Aid Council, I have retained them en bloc," Golding said.

The Justice Square project is an initiative of the former administration to provide additional courtroom and office spaces in downtown Kingston.

It involves a construction project, which will include extensive renovation of the old NCB building and the refurbishing of the Supreme Court, the Court of Appeal and the Office of the Director of Public Prosecutions.

Golding, when asked whether the new Government would be pressing ahead with the project, said everything would be contingent on the availability of funds.

"I think we will be able to complete the current phase but, in terms of moving to the next phase, I can't give any commitments," Golding said.