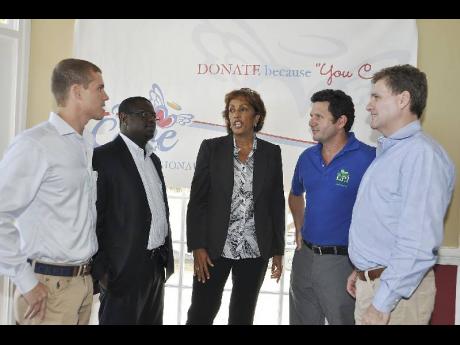 Residents in western Jamaica who access the paediatric, accident and emergency units and operating theatres at the Cornwall Regional Hospital (CRH) are expected by year end to benefit from a US$1.8 million improvement to services at the facility.

The money is being raised by a group of concerned residents, who have tagged the initiative, 'We Care for Cornwall'.

Initial fund-raising efforts will focus on the hospital's paediatric ward, with the aim of providing First-World health care with adequate equipment and infrastructure, said Stewart in his address during the 'We Care' launch at Sandals Montego Bay on Tuesday.

"The paediatric ward serves sick newborns, as well as children, and is the only facility in western Jamaica providing specialised care such as blood transfusions and ultrasound for them," he stated.

According to Stewart, in 2010, the hospital treated 6,776 paediatric cases at the clinic and did 290 paediatric surgeries. However, the ward has a bed capacity of 59 and is in dire need of 15 baby cots. In addition, it is woefully short of paediatric nurses.

"The international ratio is one to three nurses to a child, Cornwall has a one-to-10 ratio and requires an additional 60 nurses," Stewart said.

He added that the facility was inadequate for convalescing children and visiting parents.

Stewart has charged the business community to get involved in the project that has already received funding or commitment from MegaMart, Sandals Foundation, Fontana Pharmacy, Digicel, Junior Plus Preparatory, and the American Friends of Jamaica.

As of Tuesday, cashiers at MegaMart, Fontana Pharmacy and Rainforest Seafoods had started collecting donations for the ongoing project.

The hospital's CEO, Everton Anderson, has welcomed the move, lauding the initiative as very necessary.

"We cannot survive without partnership," he told the gathering.

Anderson said there had been major improvement in service at the facility which was founded 38 years ago.

"The helicopter does not come as often for patients needing neurosurgery anymore. Instead, we are having transfers into CRH," he boasted.

The hospital now has its own cardiology unit, easing travel for people who would have had to go to Kingston. The Scotiabank-sponsored dialysis unit, which started with two patients, is now accommodating 138.

"We are now one of the largest dialysis centres in the region," said the proud CEO.