'Dictatorial controls' being forced on media 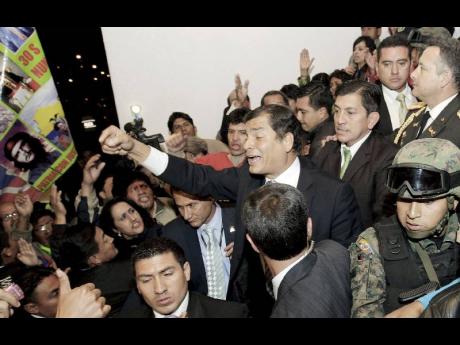 Ecuador's President Rafael Correa greets supporters outside the National Court of Justice building in Quito, Ecuador, recently. Ecuador's highest court upheld a criminal libel verdict favouring Correa, including three-year prison terms for three executives and a columnist of the opposition newspaper El Universo, and a total of $42 million in damages.ap

The Horn of Africa nation Eritrea leads the world in imposing censorship on the media, followed closely by North Korea, Syria and Iran, a journalism group said yesterday.

The Committee to Protect Journalists (CPJ) said in a report that 10 countries stand out as censors by barring international media, putting "dictatorial controls" on domestic media and imposing other restrictions.

Rounding out the 10 worst censors are Equatorial Guinea, Uzbekistan, Burma which also is known as Myanmar, Saudi Arabia, Cuba and Belarus.

Many of the countries on this year's list also were on the committee's last list, published in 2006.

"Journalists are seen as a threat and often pay a high price for their reporting," he said. "But because the Internet and trade have made information global, domestic censorship affects people everywhere."

In making its list, CPJ said its staff evaluated the countries on 15 benchmarks. They include blocking of websites, restrictions on electronic recording, absence of privately owned or independent media, and restrictions on journalists' movements.

The report said of Eritrea, which is run with an iron hand by President Isaias Afewerki, that "no foreign reporters are granted access ... and all domestic media are controlled by the government."