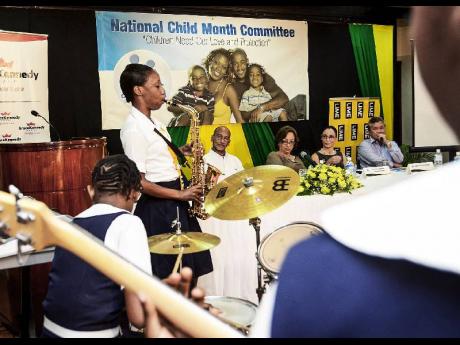 IT IS now May, Child Month, and the National Child Month Committee has told us that we should celebrate children under the theme 'Jamaica 50: Celebrate Our Children'.

The word 'celebrate' evokes images of parties and festivities, but it has a Latin origin that means 'to honour'. We know that 'to honour' means 'to hold in esteem' or 'to show respect'. For sure, Jamaicans can party, but are we truly respecting our children and holding them in esteem? It doesn't seem so.

One of the four fundamental principles that guide the Convention on the Rights of the Child (CRC) is "the best interests of the child". The United Nations Children's Fund (UNICEF) explains that, "laws and actions affecting children should put their best interests first and benefit them in the best possible way". Not just laws, but laws and action.

We should add the Charter of Fundamental Rights and Freedoms (Constitutional Amendment) Act 2011, because section 13 1(k), states: "... the rights of every child who is a citizen of Jamaica to publicly funded tuition in a public educational institution at the pre-primary and primary level."

Legislation is necessary to provide legal protection and redress for children when what they are entitled to is not provided or ensured. But as the UNICEF quite rightly noted, we need laws and action. So how are we doing with action? Not so good, it seems.

The data tell us that our children are not being educated in the way that they have a right to be. Just look at the disappointing national test results that the country debates at every sitting, or read the school-inspection reports that articulate the deficiencies where they are found. We know early-childhood education "puts their best interest first and benefits them in the best possible way," so isn't underfunding early-childhood education a contravention of the CRC?

As the most underfunded aspect of education, the early-childhood sector faces severe challenges in learning resources, the number of trained teachers and, in some cases, infrastructure. Isn't the Government's unwillingness to provide publicly funded tuition at the pre-primary level a violation of every child's constitutional right? If the nation does not provide its children with the best possible start, is it not true that the nation is limiting the potential of these children, and thus, jeopardising the fulfilment of all rights throughout childhood?

It is indeed appropriate to speak about all rights, because underfunded education may be a big problem, but it is part of a deeper issue - the way children are treated generally. Another fundamental principle that guides the CRC is 'survival, development and protection' and UNICEF says: "the authorities in each country must protect children and ensure their full development - physically, spiritually, morally and socially".

The data tell us that our children are exposed to and subject to emotional, physical and sexual abuse and violence. A few examples of statistics provided by Professor Samms-Vaughan at the launch of Child Month include: "Eight out of 10 receive verbal aggression and eight out of 10 get hit (before they leave home). One out of 100 will themselves be shot at (while walking in their communities). Three out of 10 get beaten up, two out of 10 get stoned and robbed and one out of every 10 get stabbed (at school among peers). Five out of 10 receive verbal aggression and seven out of 10 are hit (at school in the classroom). Two out of 100 will be victims of sexual assault (when they return to their communities)." And there are many more statistics worthy of note. Find these statistics disturbing? You should. But consider, too, that children are expected to perform in a deficient educational system (widely accepted as such) when they are subject to abuse and violence. How?

Jamaica celebrates 50 years of Independence this year. It is good that in the 50 years, we have enacted significant legislation to protect children and ensure their rights. Our children have many rights - education, protection and play are just a few. But the way to celebrate the fact that we have passed many laws is to enforce them. If our children received the respect due to them, we would not be faced with disappointing and disturbing data about their education and welfare. More laws without the requisite prescribed action is hardly in the true best interests of children, is certainly not actually protecting children and, most definitely, not ensuring their full development. This Child Month and beyond, the right way to celebrate children is to honour them in deeds instead of just words - respect their rights and hold them in esteem by ensuring their protection and full development, as they have been legally promised in writing.
Deika Morrison is founder of Do Good Jamaica and managing director of Mdk Advisory and Consulting Ltd. Send feedback to deika@dogoodjamaica.org.