LIME Cup tees off on Sunday 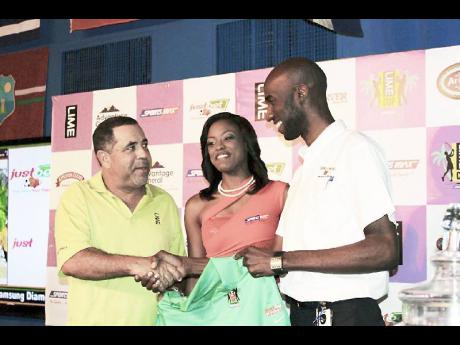 From left: Tommy Smith, participant in this year's LIME Golf Cup, accepts his jersey from hostess Chevell Burke and JustBet's Andrei Roper at the launch of the LIME Golf Cup at the Acropolis Gaming Suite in Barbican on Tuesday. - Contributed

The most anticipated and competitive event on Jamaica's golf calendar is back for its fourth edition, as the SportsMax-presented LIME Cup Team Match Play Golf Tournament tees off this Sunday, with rounds one and two at the Caymanas Golf Club.

LIME has partnered for the third consecutive year with tournament founders and regional broadcasters SportsMax, investing over J$5 million in the six-team, four-match-day event that will see the Advantage Generals defend their title against five other teams over seven rounds, at three different courses across the country from May 6 to June 17.

Based on popular demand for wider participation in what has become the premier golfing event on the Jamaica Golf Association calendar, SportsMax has increased the teams from 15 to 20 players for the fourth staging, as well as the competition ending with a semi-final at Cinnamon Hill in Montego Bay and the final at Constant Spring Golf Club.

Each team is made up of 16 male players, in four handicap flights, and four female players vying for top honours via a match-play format, which will be broadcast to 23 Caribbean countries on SportsMax and into North America on CEEN.

At the launch on Tuesday, the LIME Cup welcomed new entrants, Falcons, led by Garth Hinchcliffe. The LIME Cup will culminate with the final and consolation matches at Constant Spring Golf Club on Father's Day, complete with a number of family fun activities.