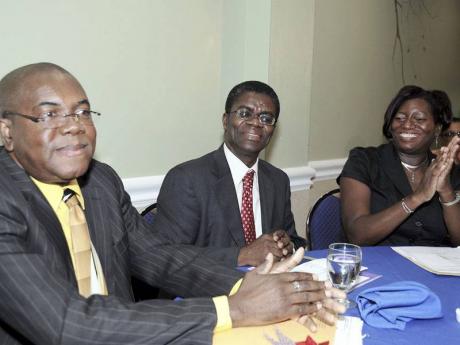 As the world commemorated World Press Freedom Day yesterday, under the theme 'New Voices: Media Freedom Helping to Transform Societies', veteran journalist Cliff Hughes took to the podium to outline how he has sought to capture that idea.

Hughes, who has spent 26 years in the profession, has transitioned from his main role as a hard-nosed journalist to media boss, establishing the Nationwide News Network (NNN) in 2005.

Despite the challenges, over the past seven years, the NNN managing director has succeeded in fulfilling his dream of creating an all-encompassing news, sports, entertainment, current affairs and business network that produces radio and television programmes for local and overseas markets.

Yesterday, during a special breakfast to mark World Press Freedom Day at the Courtleigh Hotel in St Andrew, Hughes - looking at the proliferation of new media, particularly the Internet and social media - noted that this newfound media freedom was promising to transform society in ways perhaps unimaginable only a few years ago.

He said Jamaica was poised to exploit this new media, given the re-emergence of civil society, the independence of the media, and the fact that society is beginning to ask for more transparency and accountability.

"This reality should challenge us, as a country and media fraternity, to increase awareness of the enormous business opportunities there are on the Internet. This is a low-hanging fruit that we should quickly exploit to help turn around our struggling household budgets," he said.

He added: "If we could utilise the plethora of new media platforms and distribution channels to empower our vast army of young people to become independent income earners, that would be transformation."

Hughes, however, warned that despite that proliferation, media freedom was fragile and still not within the grasp of many persons.

Press Association of Jamaica (PAJ) President Jenni Campbell told the gathering that the time has come for an end to secrecy in how the business of the Jamaican people is treated.

"As media, we are mindful of our responsibility to protect our fledgling democracy," Campbell said.

Media Association Jamaica Ltd (MAJ) President Christopher Barnes told media practitioners that the decisions they make going forward will determine the path that Jamaica takes in the battle for press freedom and the protection of human rights.

In his contribution, UNESCO Managing Director Dr Kwame Boafo told the journalists from the Caribbean region that they should cherish the fact that they are working in a media environment that has been rated relatively free by the 2011-2012 Press Freedom Index, a survey conducted by Reporters Without Borders.

During the event, late journalists Hugh Crosskill, Theodore Sealy and Len Nembhard were made the inaugural inductees in the PAJ Hall of Fame.

Immediately following the breakfast, which was hosted by the PAJ, MAJ and UNESCO, a forum was conducted for journalists across the region.