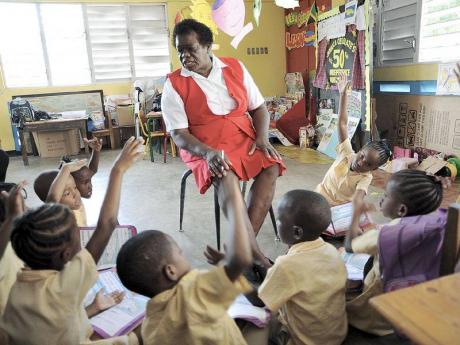 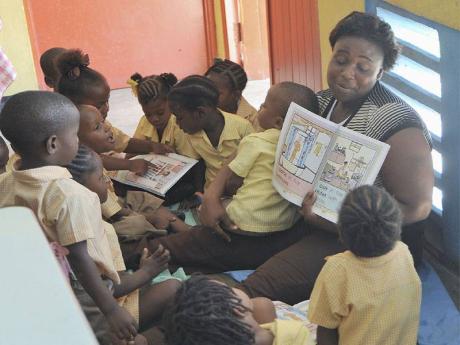 Class-one students at Victory Basic School in Trench Town listen to their teacher, Jodyann Dixon, read a story about the different sections of a house.
1
2

The heat bore down unmercifully on the group of three- to five-year-old students at Victory Basic School in Trench Town, Kingston.

The group of dedicated teachers worked feverishly to maintain their attention.

Electricity was disconnected because of the failure of the inner-city-based institution to meet the April 16 deadline to regularise its electricity supply with the Jamaica Public Service Company Ltd (JPS).

Hence the absence of working fans had resulted in scorching hot classrooms that were noticeably too much for some students.

But that was only one of the mountainous challenges hampering operations at the institution. Among the others are the lack of resources and the limited classroom space.

The one-apartment building, which is merely separated by a small blackboard and a table, makes it easy for students to be distracted by lessons taught in the other classes.

The school meets its own challenges with parents' inability to pay the school fee of $2,300 and $80 per day for lunch.

Principal of the institution, Venneta Black, said with the school only able to collect 25 per cent of the school fees from the 57 students on roll, coupled with the lack of adequate sponsorship, the school is struggling with finances significantly.

"We are having problems collecting the school fees and that is what we get paid from, so it is rough. Sometimes I have to pay them and do without," Black told The Gleaner during a recent visit to the school.

"We are having problems because now we are in need of funds to finish the process to get back electricity in the building and we can't find it," she lamented.

"The inspector from JPS came here and he said he can't pass the building until everything is done, but we don't have all the money yet."

The group of three-year-olds proved to be the ones hardest to control as the teacher struggled to get them to participate in class activities using building blocks.

As the teacher, Jodyann Dixon, attended to one table, the others were attending to their own business.

It didn't end without a fight and the students were quickly reprimanded; and the class was back to business.

"I have to supervise one group and then another so that they will all get a chance to be involved, but it is not possible to do all of them at the same time," she added.

Dixon is sometimes forced to take her class near the window, which is more conducive for learning.

"They are not affected by the heat when they are at the window and I have to let them sit on the floor so that I can go down to their level," she said.

The teachers placed emphasis on reading along with the use of crayons and play dough to create drawings of what is being taught.

For the nine students in class three, it was a walkover to speak about Jamaica as they looked at the theme 'Jamaica Land We Love, the Beauty of Our Land' which is in keeping with Jamaica's 50th Independence celebration.

Sheryl-Ann Clarke, teacher of grade two, said it was not an easy task to cope with some students who were behind in their classwork due to their constant absence from school.

"The challenge is when the parents stop the children from school for a while and they come back and you are trying to help them to reach the level the other students are at and then they stop again. It really affects them," she explained.

The limited staff had left the principal with no option but to multitask to get things done.

She acted as the principal by overseeing the day's activities, being a teacher for class three, and rushing to the kitchen to ensure the meal was prepared for the students by lunchtime.

She boasted about the students' performances saying they are working at their required level.

"They are doing good at this time, especially the five-year-olds, because we are getting them ready for primary schools now and to this point they are ready," she said.

She said, however, the school is not fully up to date with the Early Childhood Commission.

"We are lagging behind with the records because most of the parents don't come in as yet with birth certificate and passport-size photos but we have to keep pressuring them," she further said.

The school is also without a trained teacher at diploma or degree level, but Black said the teachers who are trained up to level two in the National Council on Technical and Vocational Education and Training are competent enough to care for the kids.