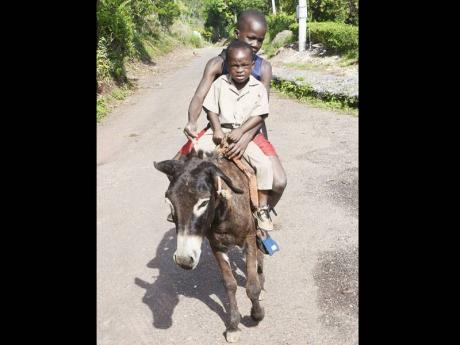 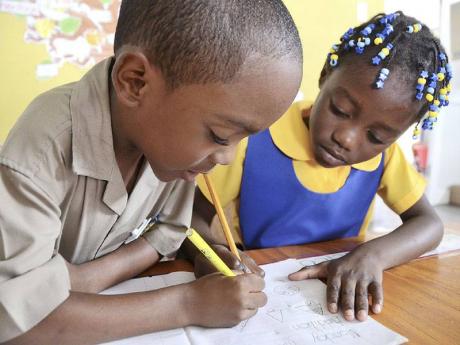 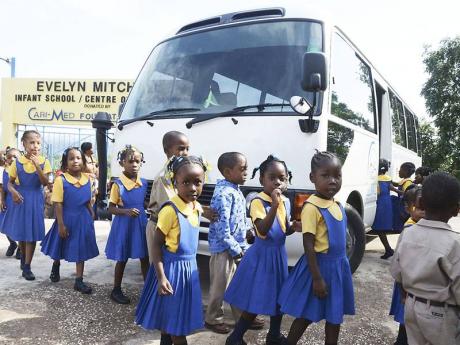 The children arrive for school at the Evelyn Mitchell Infant School/Centre of Excellence in Top Hill, Clarendon. The free school-bus service is courtesy of Cari-Med Limited. - photos by Rudolph Brown/Photographer 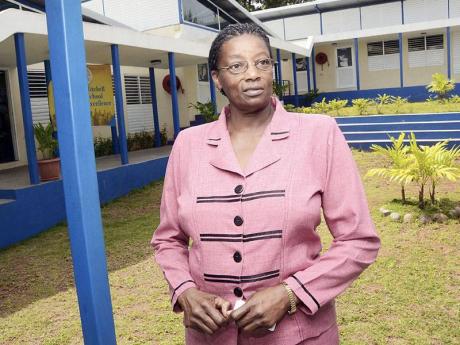 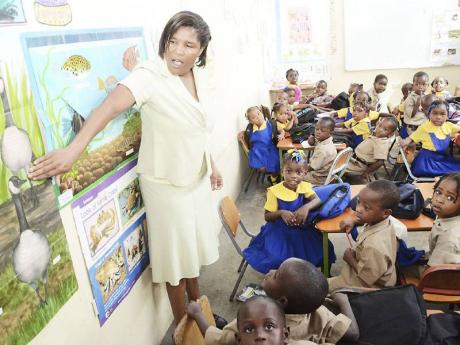 THERE IS no doubt why the Evelyn Mitchell Infant School/Centre of Excellence is hailed as the perfect model for a holistic approach to early-childhood development.

The institution caters to the physical, mental, social and spiritual advancement of children from the formative stage of their lives, in an environment that is extremely conducive to learning.

Located in the serene, mountainous community of Top Hill, Clarendon, surrounded by lush vegetation, the modern-day centre, which is valued at more than $70 million, has been touted for the excellent performance of its students.

When the doors were opened in September 2010, they had a vision to be a model institution and a mission to provide a holistic culture of excellence in early-childhood services free of cost, quite unlike the typical early-childhood school. And, so far, they have been living up to that commitment.

The Gleaner team recently spent the day at the institution to get a first-hand experience to see what makes them excel above the rest.

Just after 8 a.m., Barrington Grant steered the school bus on to the compound and the neatly attired three- to five-year-old boys and girls descended in single file.

Grant explained that, on a daily basis, he picks up and drops off the children at central points in the communities of Turtle Pond, Brandon Hill, Johnnie Hill and Top Hill, which is a free service to the parents, courtesy of Cari-Med Foundation. Those living nearby find their way to school.

Greeted by principal Moureen Lumsden and the teachers, the youngsters walked down the steps surrounded by educational murals on a number of subject areas.

Passing the well-manicured grounds, they orderly filed into their clean, neatly arranged, spacious classrooms, swirling with charts, drawings, images and diagrams on a range of topics to stimulate their minds.

The 110 children - 56 girls and 54 boys - eagerly prepare to take on the varied planned activities until the close of school at 2 p.m.

Carrying out their tasks with great zeal and determination, principal Lumsden and the nine teachers, five of whom are trained early-childhood educators, tailor the lesson plans to foster critical thinking, as the children are forced to use their imagination to solve puzzles, identify and describe the purpose and use of daily objects, among several other problem-solving and creative-thinking activities. Reading, writing and arithmetic is also a central focus.

Each class had its own reward programme that compensated the children for things like good behaviour, outstanding performance and helpfulness.

The school also trains the children to take on responsibility and prepares them for what they will encounter as they grow older. Unlike the typical early-childhood institution, they have a head boy, head girl, deputy head boy, deputy head girl, six prefects and four class monitors.

"Evelyn Mitchell is a model school, so it is important that we show that in every way. We are really dedicated to our task, we seek to do what we have to do," said Lumsden.

Evelyn Mitchell Infant School/Centre of Excellence is an expansion of the vision of principal Lumsden. An educator for more than 23 years, Lumsden was always desirous of expanding the Top Hill Basic School. The school was just a small extension of the Privilege Baptist Church (a member of the Jamaica Baptist Union) and it needed to be improved and meet the requirements to be licensed by the Ministry of Education as an early-childhood institution.

Lumsden, who was principal of the basic school, expressed this desire to church member Hilda Grant, who shared the vision with her brother, Glen Christian, chairman and chief executive officer of Cari-Med Limited and Kirk Distributors Limited. Born in Brandon Hill, Clarendon, Christian always wanted to do something for his community, so he immediately acted on the idea and developed that vision on a much grander scale.

The cane field located behind the church was turned over to the development of the school and Christian put up over $70 million of his personal funds to create what we now see today.

In September 2010, the doors of the 56-year-old Top Hill Basic School were closed and reopened as the Evelyn Mitchell Infant School/Centre of Excellence, named in honour of Christian's mother.

The school was initially built with four spacious classrooms, but with an overgrowth in population, the library had to be converted into a classroom. Each classroom has its own bathroom and play area.

Beside the principal and administrative offices is a staff lounge, sick bay, kitchen and two bathrooms. Downstairs to the back is the Hilda Grant Auditorium and canteen, also with its own bathroom, with a week-by-week lunch menu displayed. The only cost to the students is the $80 for the cooked lunch.

In front of the canteen is a play area, which will soon be expanded into a fully-equipped playground.

The entire building is equipped with smoke detectors and a fire-alarm system with fire hoses.

Plans are under way to build another classroom as well as a library and resource centre, equipped with computers and television with a DVD player, to introduce interactive learning.

They will also be instituting a number of extra-curricular activities.

"The whole infrastructure of this school is so different from other early-childhood institutions, which was the idea," said Lumsden.

"The set-up of the school makes learning much better for the students, which is shown in their performance. When I compare how the students perform in this environment to other schools I have worked in and know of, the difference is exceptional. It comes out in their grades, attitude, overall performance and approach to life. Having the right environment is very important to their development."

The principal said she is convinced the school is doing something right, judging from the many accolades they have been getting.

Principal Olive Bygrave of Brandon Hill Primary School, for instance, has expressed how impressed she was with the students from Evelyn Mitchell.

"She said there is such a difference when compared to those from other schools. She said the children were doing exceptionally well," said Lumsden.

The fame of the school has been spreading far and wide. Not only have persons visited just to see for themselves, but already parents have been coming in to register their children, despite the fact that registration doesn't open until June.

"One parent said she did not want to be left out so she made sure to come in early," beamed the proud principal, who lives just a stone's throw away from the school.

She especially thanked Christian and his family, who has made a commitment to continue funding the advancement of the school, as well as finding other sponsors.

For head boy Tyrique Richards, "school is okay". While head girl Jezelle Richards shares with The Gleaner, "I come to school because I want to learn."

With the proven fact that the right early-childhood training is critical to a child's development, it is hoped that the Evelyn Mitchell model will be adopted across Jamaica.