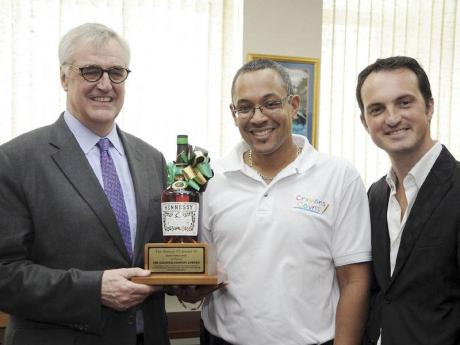 Maurice Hennessy (left) makes a presentation of one of the limited-edition bottles of Hennessy VS blended for Jamaica's 50th anniversary of Independence, to Christopher Barnes, managing director of The Gleaner Company, on Tuesday. With them is Geoffrey Bouilly, marketing manager, Caribbean, for Moët Hennessy. - Ricardo Makyn/Staff Photographer

Jamaica now has in stock 24,000 bottles of Hennessy VS cognac, specially blended to commemorate our 50th anniversary of Independence. They were personally delivered by Maurice Hennessy (popularly called Mr Hennessy), eighth generation heir of the company's founder, to the island this week.

Hennessy told Today the gesture is a way of saying thanks to Jamaica for its business over the years.

But just what makes this cognac so special? "It is a Hennessy VS blend of 40 different cognacs, some aged for periods of two to eight years," he said.

The grapes are grown in the four best growth areas in the Cognac region of France, comprising some 70,000 hectares of vineyards by 5,000 farmers. Maurice Hennessy is among them.

He said 1,700 of those farmers supply Hennessy and this special blend is the same as Hennessy VS, but a special label has been designed using the colours of the Jamaican flag (similar to that done in 1962).

Hennessy VS Limited Edition will only be available in Jamaica through J. Wray & Nephew Limited