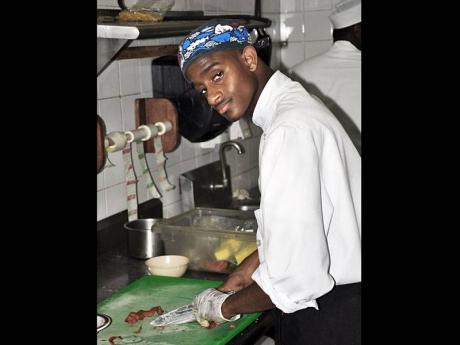 The story of Lorenzo Stephenson is one of courage, determination and unstinting self-belief.

Stephenson is mute and hearing impaired. He has not been able to speak or hear from birth. But today, this 20 year-old has risen to the position of cook at the prestigious Sandals Royal Plantation, in St Ann, with loftier ambitions of one day becoming a top chef in the hospitality industry.

"Lorenzo's story is an amazing one," gushed Peter Fraser, general manager at the hotel, and the person who decided to take a gamble on the young man. "He came here as a trainee in our Hospitality Training Programme," said Fraser. "At the end of his six-week stint, I would normally not have employed someone who is mute and hearing impaired, because, as you know, communication is a vital part of working in a kitchen. However, he improved so rapidly and impressed all the kitchen staff, many of whom were able to communicate with him, that we decided to hire him permanently."

Fraser describes Stephenson as "quick to learn, pleasant, affable and very special. He has the cook's touch and could go a far way." Stephenson was born in Pineapple, a bustling and populous community, along Main Street, Ocho Rios, in the parish and grew up with his father, Billy Stephenson, a craft vendor at the local market.

"Mi proud a him," said an elated Billy. "To know that he has come through all the odds and is making something of himself. I am happy he is not one of those children on the corners kneading out of his hand middle." So proud is dad, that he says about his son, "You see, I took him from his mom when he was just four years old and have grown him ever since. I have put everything into him and I am so pleased at the outcome."

The younger Stephenson's early schooling took place in Brown's Town, St Ann, but the bulk of his education was done at the Caribbean School for the Deaf in Mandeville, a place of which he speaks (via sign language) with awe and reverence. It was there that he learnt sign language and developed a passion for cooking.

Affable, well-groomed, with a radiant smile and infectious personality, he comes across as confident and well-mannered. His eyes sparkle as he communicates.

Stephenson's passion for cooking developed while at school, where his love for working with his hands made him adept at pastry-making in particular. He studied food preparation and eventually attained a Grade Two pass at Level 1, which was an outstanding achievement.

Back on his old stomping ground at Pineapple, Stephenson was determined to gain viable employment and make a mark in his chosen field. He applied for a job at Beaches Boscobel and did some training there. His obvious talent, however, caught the eye of the hotel's management which, with no vacancy available, referred him to Sandals Royal Plantation. There he joined the aforementioned hospitality programme, which youngsters are given hands-on training for six weeks, receiving Sandals certification at the end. Due to his outstanding performance, Stephenson beat out many of his fellow trainees to attain the coveted spot in the kitchen and begin the next step of his life's journey. Today, he is a vital and vibrant member of the kitchen fraternity. His task is to prep dishes for the chefs, many of whom have taken him under their wings, buoyed by his enthusiasm, personality and penchant for hard work.

The man, however, who Stephenson credits for his rise from relative obscurity, and who acts as his mentor, is chef Gian Stewart.

They hit it off immediately and the chef worked hard at improving the lines of communication between them, helping the youngster to hone and develop his skills. Under Stewart's stewardship, and with the overall expertise of Executive Chef Peter Hamil, Stephenson is now a firmly entrenched member of the 'family'. Don't believe Lorenzo receives extra-special treatment in the kitchen because of his disability. In fact, he is one of the most hard-working team members, often pulling double shifts when someone is absent.

"I love it here," Lorenzo said, via sign interpreter. "It's like a family. I feel comfortable and the chefs teach me a lot every day. I have found my calling in the kitchen at Sandals Royal Plantation and I know that with God's help, one day I will become a chef."